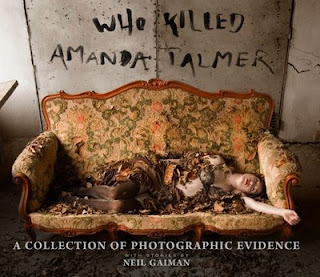 The Who Killed Amanda Palmer book is subtitled "A Collection of Photographic Evidence". This book is a series of pictures depicting the various ways Amanda Palmer has been killed. That's the premise of the book (and the album).

There are brief stories written by Neil Gaiman. The stories, like the photos, are glimpses into the deaths of Amanda Palmer. Some of them are a touch on the gruesome side.

I don't know how well the book would succeed as an independent entity. I am not the market for photography books (though I do enjoy them), but from that perspective, I do think Who Killed Amanda Palmer is an interesting coffee table book which depicts one woman found dead in a wide variety of ways. Seriously, the typewriter to the head (and accompanying story) is easily my favorite.

Where it truly succeed is as a companion to the album. Now, I don't know how well the album has sold or what Palmer's reach has been in terms of getting the album out there (to say there are issues with the her label would be to revel in understatement), but this book is a beautiful collection of lyrics, photographs, and short-short stories from Neil Gaiman.

Who Killed Amanda Palmer is a beautifully put together book.

I think it's worth it. But, as it has been suggested recently that I may have a crush on Amanda Palmer*, I may not necessarily be the most impartial of judges. Despite that, this is a pretty damn cool book and I'm glad I bought it.


*it's a completely platonic musical crush, I swear it. I'm taken, she's taken. What more do you need to know?
Posted by Joe on Monday, July 20, 2009
Email ThisBlogThis!Share to TwitterShare to FacebookShare to Pinterest
Labels: Amanda Palmer, Neil Gaiman, Who Killed Amanda Palmer

You totally do have a crush on Amanda Palmer!

Also: y'know, I think maybe I actually *am* the market for photography books about fake death scenes.

You may be. You check it out when you're next up here.

I just finished this one myself and LOVED it! Glad to hear that you enjoyed it too ;)