The Pilo Family Circus, by Will Elliott 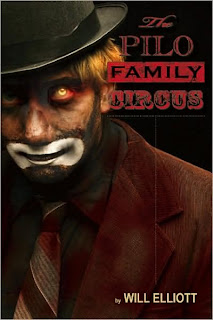 
Jamie is a bit of a loser. He’s nothing special, just a guy who one day sees three clowns committing a crime and discovers a bag of some strange powder they leave behind by mistake. Jamie, being a bit of a loser, decides to ingest some of this powder – despite the fact that he doesn’t know what it is. Yeah. Loser. Anyway, this brings him to the attention of the clowns and he soon finds himself in the middle of a nightmare he can’t escape from.

“You have two days to pass your audition. You better pass it, feller. You’re joining the circus. Ain’t that the best news you ever got?”

The clowns are absolutely insane. Two of the clowns he first saw, Doopy and Goshy, are barely functionally retarded. Seriously, they are not all there and not in a polite way, either. Gonko, the leader, is a nasty git. There are two more clowns, and they are no more sane or gentle than these three. Perhaps because of the powder, Jamie is recruited into the circus and with the trashing of his flat, the alternative is death. Passing his audition, Jamie finds himself is some sort of alternate reality where the circus exists somehow out of time. The clowns are at war with the acrobats, the owners – the Pilo brothers – are nearly insane and not to be crossed. This is a nightmare dreamscape of a circus and when Jamie puts on the facepaint, he turns into JJ – a vicious (if cowardly) clown with no moral center.

Welcome to The Pilo Family Circus.

This novel is nuts. The Circus is populated by grotesque people, all who once were regular humans like Jamie, but transformed by the Circus, by the powder, by the Pilos, by the Master Manipulator. Will Elliott has an insane imagination and he tells a solid story of Jamie’s experience in the circus, his desire and attempts to find a way out, and how putting on the facepaint changes him. Jamie and JJ are two different people, each with control of the body depending on whether the facepaint is applied. It’s crazy, grotesque, nasty, impressive, and just plain nuts. That is probably the best word for The Pilo Family Circus.

I described the circus as a nightmare, and that’s exactly what it is. It changes the members into gross exaggerations of who they might be (perhaps the opposite of who they truly are, but this is not clear). There is a hint of an explanation of how the audience finds the circus, and what the true purpose of the circus is (it isn’t pleasant). The whole situation is monstrous, and Will Elliott is so over the top that the storytelling can be seductive at points.

It can also be utterly rude and disgusting (let me simply reference the consummation of the “relationship” between Goshy and a plant), but that is part of the point here. Everything is rude and disgusting and over the top in terms of violence and language and absurdity. That’s not inherently a bad thing, but it should be noted. If you like the horror and you like the nasty, and you’d like another look at some evil clowns, The Pilo Family Circus is exactly what you’re looking for.

The Pilo Family Circus is the second novel published by Underland Press and it’s another one readers should come into with a fortified and strong stomach (though it isn’t as flat out nasty as the physical mutilation of Last Days was). If the first two novels can be used as a gauge, Underland Press is building a strong, if somewhat sick, lineup of fiction.

This is definitely the sort of thing I could get into. Relish, even.