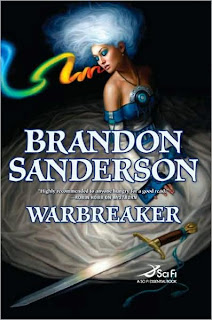 Brandon Sanderson has received a good deal of attention over the last couple of years. Most of the attention stemmed from the announcement that Sanderson was tapped to write the concluding volume of Robert Jordan’s Wheel of Time series and conversation branched out from there. Sanderson is the author of four previous fantasy novels for adults: Elantris (a standalone fantasy) and the Mistborn Trilogy (The Final Empire, The Well of Ascension, The Hero of Ages). If one was so inclined to look at it like this, Warbreaker is Sanderson’s final chance to win Robert Jordan fans over before The Gathering Storm comes out later this year.

Years ago the King of Idris signed a treaty with the Kingdom of Hallandren. The Idrian King would send his eldest daughter, Vivenna, to wed Susebron, the God King of Hallandren. Vivenne trained her entire life to be a suitable bride for Susebron and thus do her duty for Idris and help forge a stable peace between Hallandren and Idris. That was the plan. That was the plan until the Idrian King sent his willful and disobedient daughter Siri in Vivenna’s place.

Thus begins two of the three major storylines of Warbreaker. Siri attempts to find her way in court of Susebron and discovers the hidden truth about the God King. Thinking Siri wholly unsuited for her new life, Vivenna journeys to Hallandren and meets with the Idris operative working in the Hallandren capital and begins a new life of undercover espionage and sabotage. Vivenna’s plan is to rescue Siri. The reader quickly learns that Siri needs no rescuing.

The third major storyline features one of Sanderson’s more entertaining characters, a being named Lightsong. I use the word “being” because the court of Susebron is made up of the Returned. The Returned are viewed as Gods because they were once humans who died doing something heroic and were resurrected from death into a being more powerful. Lightsong, however, does not believe he is a god. Or that any of the Returned are gods. Lightsong’s does not take himself or the other Gods seriously and it is this questioning unbelief in his own divinity which will push him into the larger story.

The answer is that he does a very good job in telling the story and in using his creativity in worldbuilding to provide the reader with a well thought out world that comes across as a place that could be real. Brandson Sanderson does a consistently excellent job in writing compelling characters who are more than just a set of attributes. He also does an outstanding job at looking at the tropes of fantasy and coming up with fairly fresh and original magic systems to build a world around.

This time Sanderson uses color and Breath. Here’s the idea: every person is born with one Breath in their body. It is the spark that gives them life, though not exactly. Anyone with Breath can, willingly, give up their Breath to another. They will continue to live, but as one considered a Drab. Drabs do not see colors as crisply and do not appear as distinct to others with Breath. Breath becomes a commodity with a high value. Breath is also the basis of the magic system, because adepts can, at great cost, gather a larger number of Breaths to them and at certain numbers, they will reach a Heightening. They see colors more distinctly, and various heightenings give different powers (if you want to use that word) to the adept. Breath also allows the user to bestow a breath (or more) onto an inanimate object, bring it to a semblance of life, and command it to perform some simple task. The more complicated the task, the more Breaths required. The adept can (and should) reclaim those breaths when the task is complete.

Color is an offshoot of breath in that those with more Breath lend their clothing sharper and more defined colors (and thus can be identified easier) and can also perceive greater variations in shading. Breath is more important, but color provides definition and richness to the world.

This is an aspect of worldbuilding and of storytelling which Brandon Sanderson succeeds at. He builds this rich, vibrant world with a distinct and fresh magic system. Then he populates the world with a cast of characters who are shades of grey, generally neither all good nor all bad, but are people acting in the best interests of themselves or their nation. They do the best they can and make mistakes. The characters are people the reader wants to know more about.

This is a long winded way to say that Warbreaker is Sanderson’s best and strongest novel yet. It shows Sanderson trying new things and trying to continue to improve with each book. He has. There is a richness of imagination and strong storytelling in Warbreaker that should please any and all fans of high fantasy.

This is also a long way to address the original paragraph, which is to say that if Warbreaker doesn’t convince Robert Jordan’s fans that Sanderson is up to the task of completing The Wheel of Time in as satisfying a manner as possible, nothing will.

Previous Reviews
Elantris
Mistborn: The Final Empire (I know, I barely said anything)
Mistborn: The Well of Ascension
Mistborn: The Hero of Ages (no review, apparently)
Posted by Joe on Tuesday, July 21, 2009
Email ThisBlogThis!Share to TwitterShare to FacebookShare to Pinterest
Labels: Brandon Sanderson, Warbreaker

I read the "Mistborn" trilogy and have been blown away. "Elantris" is on my shelf and after reading your excellent review I know that "Warbreaker" is a must read for me.

Talk about timing. My copy of Warbreaker arrived yesterday, and I just posted my own review of Elantris at http://errantknave.blogspot.com/2009/07/book-review-elantris.html. Consider me a WoT fan that was won over.

And there you go!

edi: Warbreaker really is his best, I think.