Welcome back to my Melanie Rawn re-read! When we last left off, in March of last year, we had concluded Rawn's Dragon Prince trilogy (Dragon Prince, The Star Scroll, Sunrunner's Fire) and I suggested that I would resume the re-read in a timely manner.  This was obviously untrue and I clearly cannot be trusted when I say when a certain article is going live, but here we are again at the start of a new trilogy.

In my write up of Sunrunner's Fire I suggested that if you consider story arcs across the series, the six books really comprise a single trilogy that looks like this:

I still think that works. Where Dragon Prince was a standalone that set up future stories, The Star Scross and Sunrunner's Fire had distinct story arcs that were as much in service of setting up a larger story as they were concluding the proper story arc of dealing with the fallout from Roelstra.  Dragon Star is three books comprising one war. 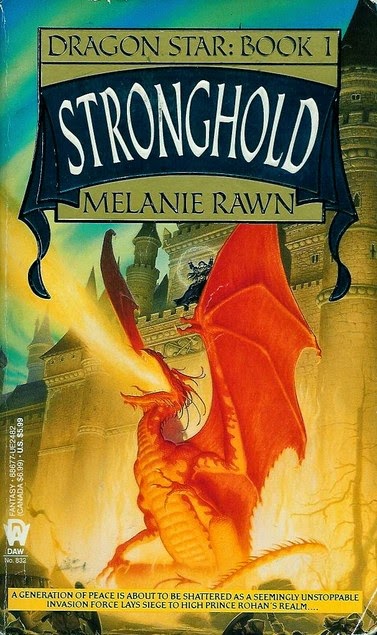 As before, this is less of a proper review and more of a re-read.  There is an excellent chance of book and previous trilogy spoilers, though I will attempt to limit (but not necessarily eliminate) those that touch on the remainder of the Dragon Star trilogy.  You have been warned.  The quick answer is that I am a huge fan of these novels from Melanie Rawn and very highly recommend them. Go read, I'll still be here.

One way that I keep describing both Stronghold and the Dragon Star trilogy is: Melanie Rawn kills everyone and burns the whole thing to the ground. I mean this in the best possible way, but everything that Rawn spent so much time and emotional energy building in the Dragon Prince trilogy with Rohan and his dreams of peace is completely shattered with the invasion of the Vellant'im.  We know nothing about these people, except that they are bearded, targeting faradh'im (the Sunrunners) and are destroying and burning their way across the continent, seemingly towards the desert.

Rawn was likely planning this from the start, given that she published Dragon Prince in 1988, published the next two in 1989 and 1990, and immediately published Stronghold in 1991.  But, more than publishing one trilogy and and then working on the next one, Rawn seeded The Star Scroll and Sunrunner's Fire with hints of the Dragon Star novels. It was the war with the sorcerer's, but also the continuing hints of Andry's vision of his world in flames and his family destroyed. Andry knew this war was coming, though he didn't know when or how.  Stronghold shows how.  Or, at least, the beginning of how.

The build to war is slow. There are several more hints at the invasion to come, the first coastal cities are hit but they are hit during cloud cover so it takes longer for word to spread to Stronghold and Dragon's Rest than it otherwise might. Scattered reports are getting through, and what to believe?  Except that the invaders are burning and gutting cities / castles and then moving farther inland.

Stronghold is where Rawn starts killing minor (and major) characters. This invasion is for real, and nobody is safe. This is made clear as the invasion begins to hit the Desert.  But, besides the invasion, there are two other primary conflicts. The first is the inevitable conflict of Pol vs Andry. At this point Andry is well established as Lord of Goddess Keep with fully established power. Pol is the next High Prince and is starting to step into that role, but he's still a step behind Rohan because Pol doesn't fully inherit so long as Rohan is around.   But, a central conflict of the series is the battling influences and ideas of Pol vs Andry. It doesn't get any better here.

The other conflict is, sadly, Pol vs Rohan. Despite being lord of Princemarch and the next High Prince, Pol still lives in the shadow of his father. As one does, especially when one's father is such a prominent and vital man in that particular world.  Pol chafes, and he has the inexperience of youth that his ideas of how to behave and what the appropriate response should be is in conflict with what Rohan knows based on his years of experience and what he has spent his life trying to build (unified rule of law, general peace).  But as the invasion deepens, Pol begins to no longer trust his father's decisions. He wants desperately to believe in Rohan like he did as a child, but each step chafes.

Which is the point that I start bringing in my own personal situation into the book and I think about my relationship with my father and the relationship I hope to have with my (now) three month old son, and the struggles of fatherhood and growing in different directions but still being family. I think of Andry's relationship with Chay (his father) and with Rohan and Pol (uncle and cousin), and of my extended families and my hopes.  This has nothing to do with the book itself, but it part of my introspection around it.  It's the stuff that I think about when I think about the book. Getting older changes how you think about stuff, and that's even when you don't have a near nameless murderous invasion destroying your land and you see your father just not doing anything to stop it and that's all you want is for him to act.

So, Stronghold.  It's a brutal novel, filled with death and disappointment. Of course I like it

Unlike the Dragon Prince trilogy, which I've read many times, I've only read Dragon Star once. And of that once, I'm not sure I've ever read the second volume Dragon Token. I know I've read Stronghold once before and I know I've read Skybowl, but I vaguely remember never being able to find a copy of the middle book when I was younger.  Now I have it.  So, we'll see if my Melanie Rawn reread proceeds with a book I don't remember at all.

This time, I make no promises as to how quickly the next article will go up.  Just know that it will.