If nothing else that is good will come from the mess of the 2015 Hugo Awards, one thing did. I am now reading Eric Flint. After reading Flint's commentary on the Hugo Awards (and awards in general), I decided it was time to step into a series I've seen on bookshelves for years.  I started with Flint's recommended reading order, since there are a growing number of books in the 1632verse and they start branching fairly quickly. That brought me here, to 1632. 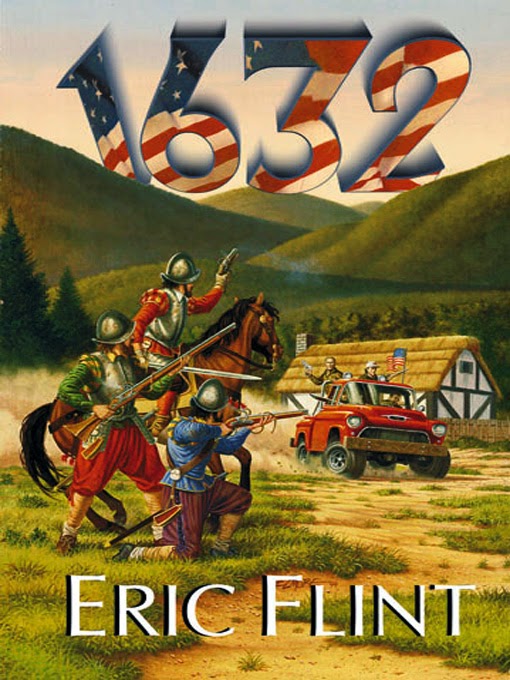 1632 is an odd bit of alternate history where through alien means that don't actually matter, a small West Virginia mining town from the year 2000 is sent back and sideways in time to the year 1631 and moved geographically to a region in central Germany in the midst of the Thirty Years War.  Again, the how this happened really does not matter at all. It isn't a plot point in 1632, and from a cursory understanding of the overall series, it isn't a plot point at all. It is answered, it just doesn't matter.

What happens, though, is a community of hard working, blue collar twentieth century Americans are dropped with all of their technology and modern day weaponry into a seventeenth century war zone with no way home. They intend to survive, adapt, and perhaps kickstart the American Revolution much sooner than the world was prepared for.

The comparison I keep making in my head is that of John Grisham, Michael Crichton, and Dan Brown. Perhaps more Grisham and Brown than Crichton, but his name continues to surface in my thoughts. The comparison I am making is of authors writing fairly straight forward, clean, and fast paced novels that hook a reader early and pull them along the story. Flint is a bit heavy handed in presenting the values and perspectives of the various characters in 1632. There is very little subtlety here. The focus is on storytelling and engaging the reader with an up front and entertaining story.  That's what Eric Flint has done with 1632.  It won't be confused with more literary science fiction, but then, it doesn't need to. 1632 accomplishes exactly what it has set out to do, which is tell a damned fun and entertaining story.

Readers can imagine what might happen if a community of modern Americans are dropped almost four centuries into the past, especially if it is a community of Americans who are used to adapting to difficult situations. To crib off a review from Jay Garmon,


"the tone is relentlessly positive, celebrating honest, hardworking folk of two eras who come together to make a better world. In lesser hands, this would come off as jingoistic claptrap, but Flint succeeds at making the whole adventure palatable by populating his tale with thoughtful, likeable, fallible characters with well drawn motivations."


1632 is a very American novel, but it is American in the best ideals of the nation. The men and women of Grantville and the local United Mine Workers of America rally together to both make their way in this new / old world, but also through the strength and vision of Mike Stearns, the local UMWA president, to build a better new / old world for where they are at.  It is American in that the ideals of social and class equality are given a real chance to succeed in a setting which scarcely understands the concept.  Whether it will end up as the more perfect union is another matter, and probably will be answered as the series progresses.

The novel is a touch bloodthirsty as it moves along, but given where and when Grantville was dropped, perhaps this is to be expected. I'm not saying that this is a bug, however, since the overall rampant optimism of the novel's tone and the perspective of the Americans is a driving force. One can certainly draw a parallel between bloodthirstiness and Americans in general, and heaven knows that I certainly enjoy movies and books where stuff "blows up real good", but it is still worth noting here.  One thing in which I am quite curious for how the series as a whole will progress is whether the implications of that violence and bloodthirstiness will hit home on the characters.  I don't mean in terms of the over arcing story or the political situation because it is clear by the conclusion that yes, Grantville's presence and actions will have a rippling effect. What I'm talking about is rather the personal consequences. There is a cheerleader turned world's deadliest sniper in 1632, and while the town in general references a bit of its "hillbilly" and back country nature, there is a world of difference between hunting animals and killing men. This is briefly addressed and, if I may, shot down by said cheerleader, but how does the number of men she personally kills over the course of 1632 impact her?  How does the killing impact the others?  It is necessary here because in 1632 the killing is quite literally a case of kill or be killed, but how does this affect the various population of Grantville. It must, given that they grew up in a very different culture with a very different way of life and expectations than the one they are now stuck living in.  The people of Grantville are pragmatic, sure, but all of this is still a major change. Hopefully this is something Flint addresses in future novels or stories.

As for 1632, it is one heck of an entertaining read and is a novel I have not wanted to put down since I started. It is great fun and one of my more pleasant surprises in recent weeks.  I have every intention of continuing with the series, though I'll be referencing that reader's guide to make sure I'm working through in a more orderly manner.

1632 is available as a free ebook in the Baen Free Library.
Posted by Joe on Wednesday, April 22, 2015
Email ThisBlogThis!Share to TwitterShare to FacebookShare to Pinterest
Labels: Eric Flint