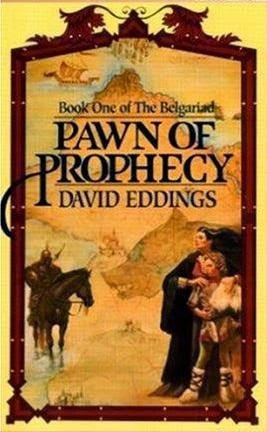 I was fourteen or fifteen when I first tried to write a novel. I'm not positive, but I'm pretty sure I made it a good ten or fifteen pages before realizing this was a horrible decision.  Ten or fifteen pages was a fairly big deal for me at the time and it gave me hope that I would be able to push forward and write the whole thing.  It would be epic, I would sell a gazillion copies and would become rich.  I was set.  The only problem, besides not being very good at telling a story or having any idea what I was doing, came when I realized I was more or less re-writing Pawn of Prophecy.  What can I say?  It was influential.

After Piers Anthony, David Eddings and his five volume Belgariad series was the second major step in my discovery of science fiction and fantasy.  Unlike the various characters of Xanth, I was pretty much of an age with young Garion, a farm boy destined for so much more. Where Xanth was my gateway to fantasy, the Belgariad was my hook. I would read these five books over and over again, probably more times than I could even guess.  Sure, I would venture out into other fantasies and continue to explore new worlds, but I would keep coming home to this particular world.

It was the simplicity that brought me back. 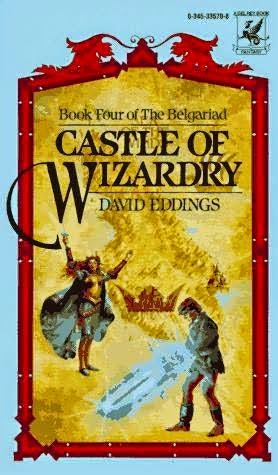 When you're first discovering a genre, you don't know what the tropes are.  You're a kid reading about a boy your age with a quiet and boring life on a farm who is pulled away on an adventure for reasons that don't quite make sense. That adventures begins to grow and grow and you, through the rather bland protagonist, discover new lands and new magic and find out that your destiny is so much bigger, that perhaps you might be a lost scion of royalty, an inheritor of magic, and you're probably going to marry a princess and become king.

It's easy to dream of these characters and put yourself into Garion's shoes, to perhaps wish that you would be pulled away on that adventure. You'd forget about the fear Garion must have faced and sure, you'd probably miss things like electricity, plumbing, and your family - but what an adventure!  What dreams!

I sometimes spend time thinking about what books I want to introduce to my kids. They'll be surrounded with all sorts of books and I'll probably read wildly inappropriate books to them at a very young age, but who knows. My wife is pregnant with our first child, a boy.  I've got a number of years to figure out what I might want to slide his way, but would I give him the Belgariad?  I don't think I would push him towards Xanth, but on the off chance I think of this in the future, I might be willing to share this one with him.  It's such a simple story, but it's perfect for hooking a young boy. 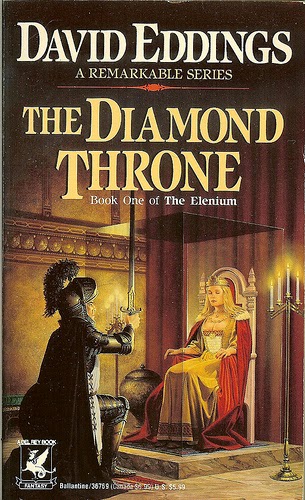 My memories of David Eddings extends beyond just the Belgariad, though they start there. I'm still, somewhat, a fan of The Mallorean, which is the five volume follow up series to the Belgariad.  And by "follow up", I mean the same exact story told with twice as many pages in each book.  It is.  Eddings plays with that idea a little bit with "didn't we already do this?" comments and weaving the ideas of the first series into something different in the second.  The Belgariad stands well enough on its own, and while I think I'd prefer it without the second series, if you're still young enough, you can latch onto the Mallorean.  I distinctly remember receiving a copy of Guardians of the West for my birthday and eagerly awaiting each subsequent volume.  It was a chance to spend more time with Garion, Durnik, Belgarath, and Polgara. And friends.

But the one series which I think I most want to revisit is the three volume Elenium, which is set in a completely different world and features a world and war weary older knight Sparhawk. There is a similar interplay with mortals and gods and kings and queens, and it is clearly written by David Eddings, but overall the novels (beginning with The Diamond Throne) feel more serious and intense. Despite all the books I need and want to read for the first time, I think I need to revisit this one.  I'm feeling nostalgic.
Posted by Joe on Monday, September 15, 2014
Email ThisBlogThis!Share to TwitterShare to FacebookShare to Pinterest
Labels: David Eddings

You are very welcome. Also, I just reserved The Diamond Throne from my local library. Because nostalgia.

I feel the exactly the same way. Eddings was my gateway fantasy author. Without him I would never discovered Tad Williams, Raymond a Feist, Robert Jordan which led me to GRRM and A Song of Ice and Fire.
I still have his original paperbacks that I have since I was a teenager!

Years ago I almost bought the omnibus sets of his stuff, but I have such a fondness for those little paperbacks. I can just picture them on my shelf. I more than wore them out as a teenager.

Piers Anthony may have been my introduction to fantasy, but Eddings was definitely the gateway.

Ah, I remember those two series fondly, but I don't think I'd revisit them now. I never read the Elenium, though. (checking) Hmm, there's a 3-book series that follows it, the Tamuli--ever read that? I'm suspicious of this pattern (is this another "same exact story" situation, as with the Mallorean?).

I don't recall the Tamuli being a repeat of the Elenium like the Mallorean is, but it's been a while.

I have first book of the Elenium from the library, so we'll see how well it holds up to my memory / my changing taste.