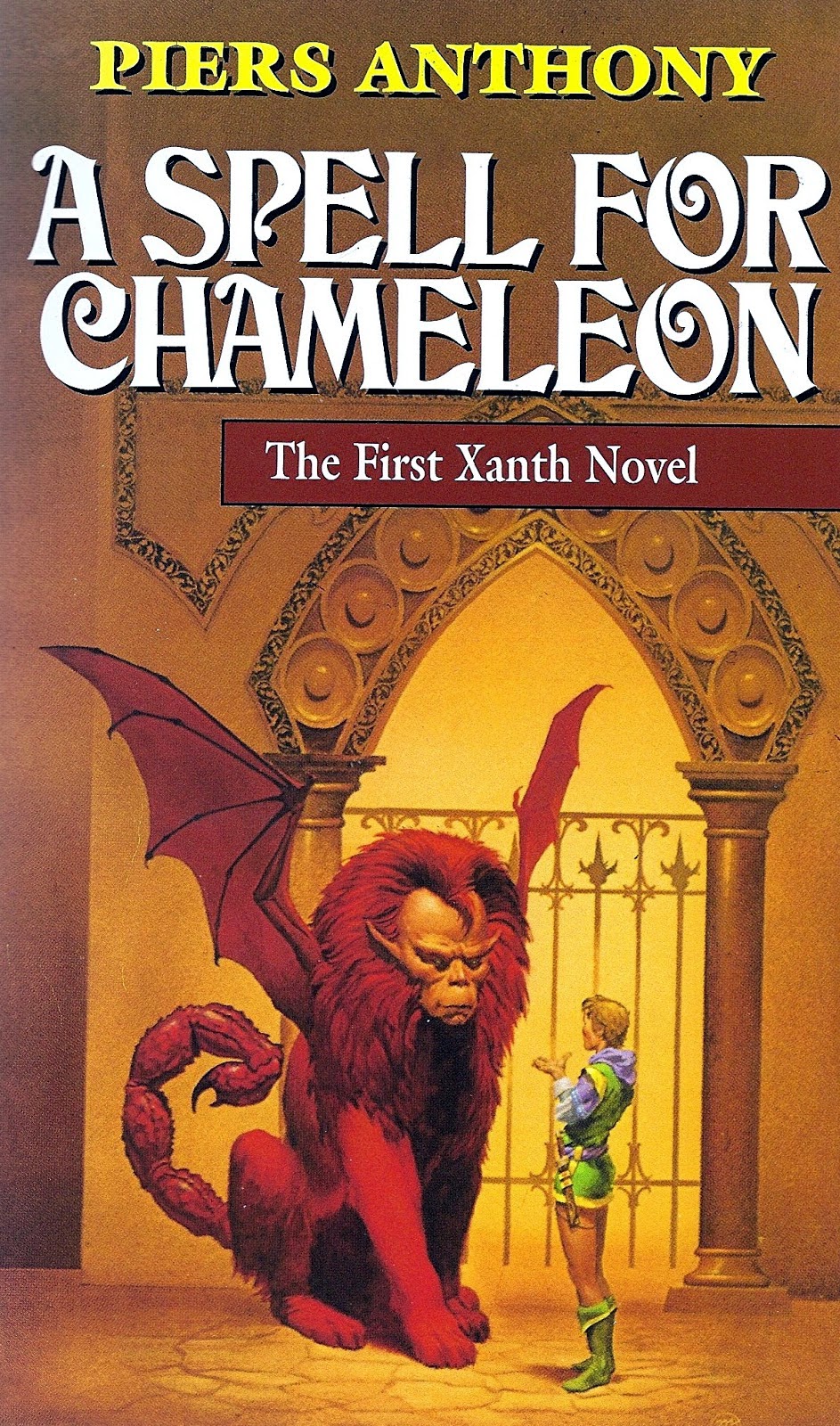 I remember overhearing two kids talking about some books they were reading. The boys were excited about how cool they were and how "adult" these books were.  They felt like they were getting something over on the adults and the other kids who weren't old enough, weren't mature enough to handle reading those books.  I was one of those kids who they didn't think could handle the adultness of these books.  I didn't know what they were, but I knew I wanted to read them. I was quietly desperate to be part of any sort of group and these were books.  Books!  I love books!

This was the end of seventh grade and my family was in the process of packing up and moving from New York City to some small town in Minnesota.  Those kids will never know it and I don't remember their names, but they set the course of what I would read over the next twenty years and more.

I had never read much fantasy before I was thirteen.  I'm sure I had read The Lion, The Witch, and The Wardrobe, but that's probably about it when it came to fantasy (I devoured The Hardy Boys).  But when I heard those kids talking about the adult books they were reading, I just had to read them.  I don't remember what they said, but I remember where they were in the classroom and I remember what the series was.

They were talking about Xanth.

Looking back over the last twenty two years, it is difficult to imagine that Xanth would have been nearly as formative as it was, or that anyone today would consider Xanth "adult".  Juvenile, sure.  Adult?

Consider the perspective of twelve and thirteen year old boys, though.  There is plenty of adventure and Piers Anthony talks around sex and violence and growing up and, if my memory is worth anything in this reminiscence, it seems to hit that sweet spot for a thirteen year old boy who doesn't know much about anything at all but wants to disappear into some other world for a while. So when I read A Spell for Chameleon for the first time in the fall of 1992, I was hooked.  Xanth was magical, and I don't mean anything to do with the magical nature of the world created by Piers Anthony.  Xanth was magical in how it transported me to a different world with characters I could care about and follow on grand adventures.  Xanth was magical in the escape it represented.  That the escape also happened to be to a place where magic was possible and the danger was not too real and always fun (and often funny) was just a bonus.

My life had just been uprooted from Staten Island, which as the least populous of the five boroughs of New York City still had a 1990 population of nearly 379,000 people - but that was still part of a much larger city with over seven million.  I landed in Rush City, population not quite 1700.  There was culture shock, and I buried myself in the public library and with the help and prompting of the librarian at the time, Jeanette Monthye, discovered new worlds that were so much larger than the small one I found myself in.  When I think about Xanth, I tend to think about everything else except the novels. I think of my life at thirteen, about how the books made me feel, about escape and magic and wonder and discovery.  I think of the journey.

At the time when I first discovered Xanth, Piers Anthony had written fifteen or so novels in the series.  I didn't know that at the time, I just knew that for quite a while, there was always a new Xanth novel at the public library for me to read.  I have very specific memories from the earliest books in that series and it laid the groundwork for my venturing on to other science fiction and fantasy authors.

I don't have the twenty two year journey of reading science fiction and fantasy if I don't take a first step.  The first step was Xanth.
Posted by Joe on Monday, September 08, 2014
Email ThisBlogThis!Share to TwitterShare to FacebookShare to Pinterest
Labels: Piers Anthony

I too devoured the series when I was in middle school. I enjoyed it so much that it was quite a shock when I tried to reread Spell for Chameleon as an adult only to discover that it is painfully, awfully sexist. I mean look no further than the nature of Chameleon herself. And if you care to look farther, find the scene where she meets Bink and consider how she is viewed by the townspeople in the context of the trial. Yikes... Weird how stuff like that can go over your head when you're a kid.

I still cherish the memories of Xanth and how it swept me into a world of magic and adventure, but I'm afraid I couldn't recommend it to any modern reader.

I completely agree! I didn't pick up on that too much when I was a kid, though I was always a little uncomfortable with how relationships were handled - it never seemed like they were real people with actual relationships.

But as an adult? Nope.

I thought about addressing it a little bit in my article, but decided stick more with the overall impact of Xanth. Where I consider re-reading early David Eddings, I just can't go back to Piers Anthony. His work was vital to my childhood, but I think that is also where it belongs.

I've had similar thoughts about Xanth to the ones described both in this post and by the commenter. I loved the books as a teenager, but when I recently tried to re-read them it was painful. I have twin daughters and I have been reading Oz to them, but I can't see myself ever sharing Xanth with them. (Well, maybe when they are older, and can understand the context in which I read the books, but at that point they're not going to be gateway books for them.)

Even though I have a good ten to twelve years before I need to think about it, I'm pretty sure I'll be with you on this. Xanth won't be the gateway for my son.