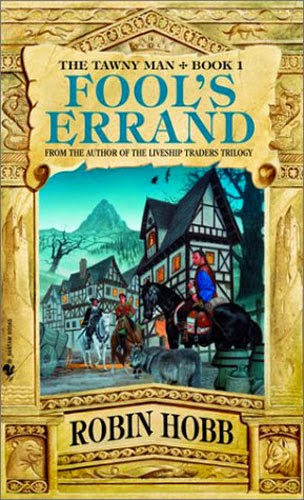 In the hands of a lesser writer, the opening to Fool's Errand would push away many potential new readers to the series away.  Hobb spends over one hundred pages reintroducing FitzChivalry to the world, letting readers gradually feel and understand the pain he has been in over the last fifteen years since the end of The Farseer Trilogy.  Fitz, a former royal assassin for the Farseer family and rulers of The Six Duchies, has been living isolated from all that he was and all that knew him.  He sacrificed much, not the least of which was his body, mind, and so much of what he loved.  Now, raising an orphan boy from the war, Fitz is otherwise alone and still struggling to find peace.

Those first hundred pages are the gradual intrusion into that difficult and only occasional peace the man has been able to find.  A minstrel and occasional lover visits.  His former mentor, the man who trained him to be an assassin, seeks to have Fitz rejoin them back at Buck because his work is needed again.  A friend, known as the Fool, requires Fitz's help.  These are familiar characters from the first trilogy, but also aged and changed by time.  No more than Fitz, now going by the name of Tom Badgerlock.

But time and distance and the beginning of a new trilogy will not let Tom Badgerlock stay hidden, because his mentor and the Fool and Queen Kettricken have need of his help and his loyalty to the Farseers will not let him turn away.

What Robin Hobb does so expertly here is take such a slow opening and build it in such a way that returning readers are rewarded for knowing what it is that Fitz has been through and for picking out some details from the Liveship Traders series in Fitz's discussion of his journey before settling into his quiet life, but that new readers should not feel lost.  The slow build gives the new reader an opportunity to feel as if they have known Fitz for longer than the have, and that even not knowing what all came before, they know enough about what happened without the weight of backstory bringing the whole book to a crashing halt.  It is a delicate balance and Hobb accomplishes it well.

This is a gradual book, otherwise known as a Robin Hobb book.  She seems to build atmosphere and tension through non-action and the reluctance to act.  Though there is plenty of action in the second half of the novel, Fool's Errand is as much an examination of growing up and the consequences of choice and service.  In many ways, Hobb does not paint a pretty picture and those with power and privilege seldom are given any more slack than the most humble of peasants.  Life is hard and it is difficult and the challenges faced are many.

The writing is wonderful and immersive and this is Robin Hobb at the top of her craft.  While I would normally suggest that readers start with the earliest published book (Assassin's Apprentice, in this case), I say to forget that. If you're new to Robin Hobb, this is as good a place to start as any.  Top notch fantasy.
Posted by Joe on Tuesday, April 01, 2014
Email ThisBlogThis!Share to TwitterShare to FacebookShare to Pinterest
Labels: Robin Hobb

Thanks for the great review! I almost set this one aside based on my 50-page rule, but you convinced me to keep going and I'm glad I did.

I'm glad! Robin Hobb is someone you generally need to give up an X page rule because she is such a slow burn to get going.