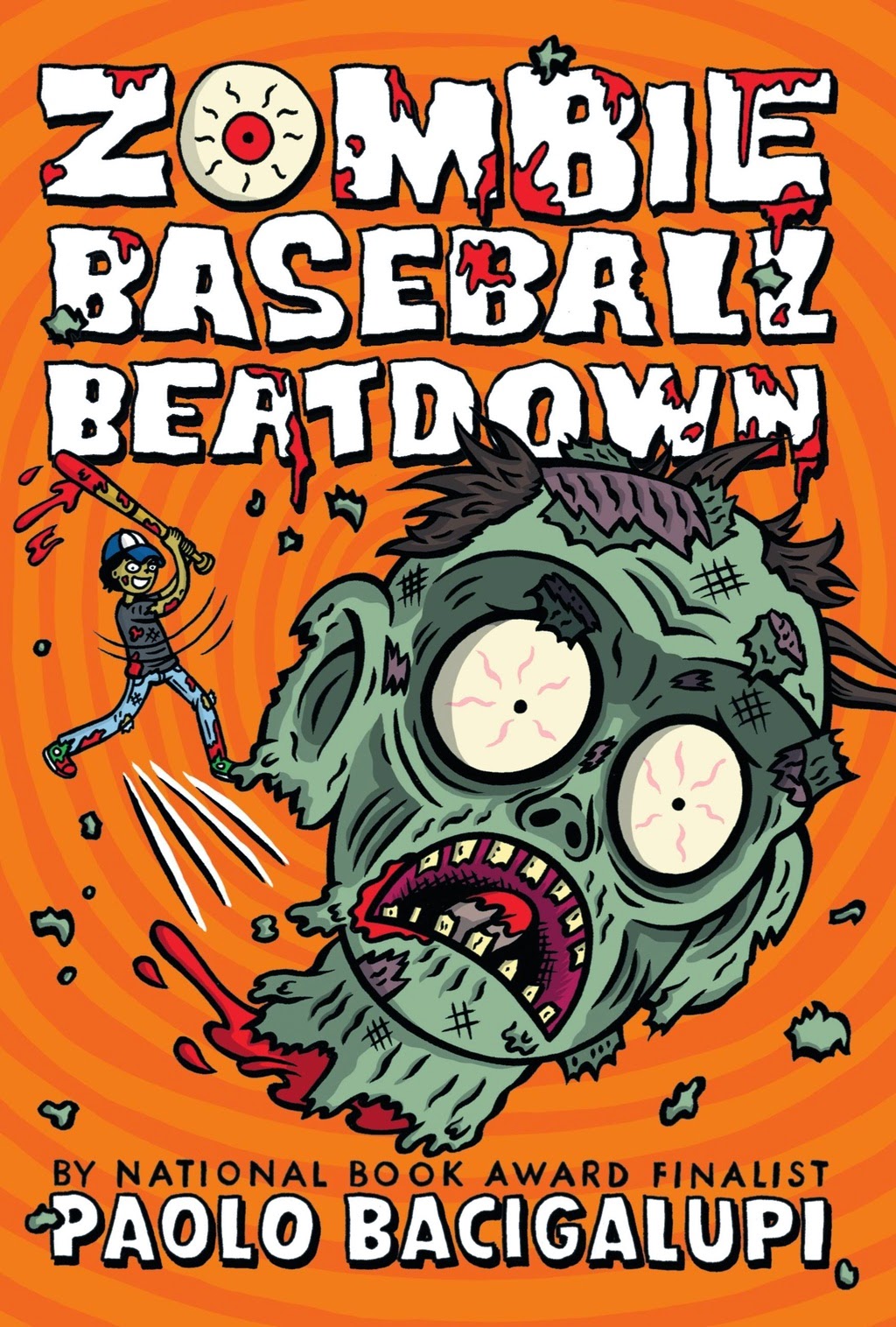 What could be more delightfully charming than a novel titled "Zombie Baseball Beatdown"?  Granted, you and I may have different definitions as to what "charming" is, but with that title, I see a fun children's book filled with zombies, baseball, and beatdowns.  All things most children enjoy.  The cover also helps to set that tone.  It looks like the awesome grandchild of those Madballs comics and toys I grew up reading and playing with.

Rabi, with his friends Joe and Miguel, is out for some baseball practice on a field out near the stink of his town's meatpacking plant. They are out there, rather than at the nicer field, because of the bullying of some of the other kids.  As bad as the regular stink is, they are interrupted by a smell that is beyond wretched, and that's where the story here truly begins.  That extra strong stink is part of the catalyst for the creation of zombie cows and for the action and adventure to follow.

This really is a perfect children's book with zombie cows, one of the meaner adults we meet early on turning into zombies, an evil conspiracy, adults and police that don't trust the children when they report that there are zombies on the loose.  Here is when the kids step up and have the chance to do something heroic.

I thought about it. "We all want to be important. I guess you just have to find some way to help people see who they are."


If that was all that Zombie Baseball Beatdown was about, it would be a good, fun book.  You could easily see how it could be a movie akin to The Goonies and be that story for a generation.

Zombie Baseball Beatdown has so much more.  Bacigalupi also deals with illegal immigration, the meat packing industry, working conditions at a meat packing facility, what really goes into the beef that we eat, ICE (Immigrations and Customs Enforcement), racial issues, culture, and what it means to be American.  It probably also has some other stuff that I didn't pick up on or that I didn't remember as strongly as the more prominent issues.

"They do not care if people are hurt, because there are always more people from Mexico or Honduras or Ecuador. I have seen people lose arms and legs and fingers in that place. In those machines. Those fast knives..." He trailed off. "It is a sickness  in that place. They care about nothing except making a little more money. And now they feed their cows strange things to make them grow faster. They give them drugs to make them not die when they live in dirt and filth. They use the feathers and the droppings and bits of chickens from their chicken factories and grind them up and give them to their cows for food, because it is cheap to feed their cows the trash of other places...I see all of this, and I do not complain, because they will deport me like that." He snapped his fingers.


Bacigalupi has written a very smart novel aimed at younger readers, and it works as both a fun and scary adventure story as well as being educational.  Having read the book, kids may be curious to learn more about any of those subjects and getting kids interested in learning more can only be a good thing.  Anything that entertains and educates is a winner in my book.  When it entertains as well as Bacigalupi's Zombie Baseball Beatdown, it's something special.  Make it fun, make it smart.  Bacigalupi does both.

If I were more widely read in children's literature, I know if I needed to go on a rant here about how this is exactly the sort of book that should be published and that more of it should be published. But, I don't know if this isn't entirely representative of what is already out there and I can be reassured that my future children will have awesome and smart books to read and that I won't need to start stockpiling them now just in case all the good books disappear.  I may well be underestimating a large chunk of kid's lit that is being published, and given that I already know of authors like Kelly Barnhill, Anne Ursu, and Alison McGhee who are writing absolutely wonderful books for kids (and adults of all ages!), I shouldn't be as hesitant about what is out there.

I just need to open my eyes to what is out there.

Either way, Zombie Baseball Beatdown?  It is an outstanding book.  For anyone and everyone.
Posted by Joe on Thursday, March 27, 2014
Email ThisBlogThis!Share to TwitterShare to FacebookShare to Pinterest
Labels: Paolo Bacigalupi