The Three-Body Problem is a novel by Liu Cixin, translated into English by Ken Liu.


The Three-Body Problem is an award-winning series by Liu Cixin—the first of which is arguably the first Chinese science fiction novel translated into English. Liu uses the “three-body problem” of classical mechanics to ask some terrifying questions about human nature and what lies at the core of civilization. The series explores the world of the Trisolarans, a race that is forced to adapt to life in a triple star system, on a planet whose gravity, heat, and orbit are in constant flux. Facing utter extinction, the Trisolarans plan to evacuate and conquer the nearest habitable planet, and finally intercept a message—from Earth.


I'm intrigued.  I also don't believe I have read Chinese literature before, and I am positive I have not read Chinese science fiction.  What better place to start than this book?

But, look at the cover art from Stephan Martiniere!  Gorgeous. 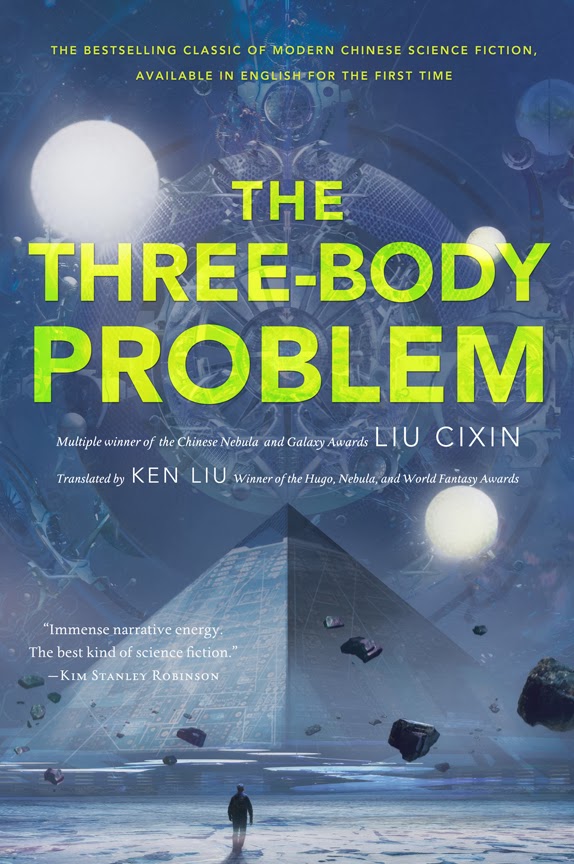 Just from the cover, I want to know more.  I like cover art as art for its own sake, but I know that the primary reason it is there is to help present, market, and sell the book.  From that perspective, the cover works.  It pulls me in.
Posted by Joe on Thursday, March 06, 2014
Email ThisBlogThis!Share to TwitterShare to FacebookShare to Pinterest
Labels: Ken Liu, Liu Cixin, Stephan Martiniere

Liu Cixin is an amazing writer and this is a truly amazing novel. Highly, highly recommended.

I also recommend his short fiction (almost a dozen of his short stories have been translated into English). Mountain (my review: http://sentidodelamaravilla.blogspot.com.es/2012/04/taking-care-of-god-y-mountain-de-liu.html ), The Wandering Earth (my review http://sentidodelamaravilla.blogspot.com.es/2012/05/review-of-wandering-earth-by-liu-cixin.html ) and The Longest Fall are favorites of mine.

I'm excited to check out his work. I so seldom see (and haven't sought out) Chinese fiction, so I'm excited to give this a try when it is published later this year in America.