"Why does it happen this way?"

Rohan's whispered bitterness startled her out of her own. His face was as composed as Pol's, but his eyes were open wounds. "What do you mean, beloved?" She made her voice gentle, forbidding fear to scrape the words raw.

"This," he repeated. "Always. One man battling another."

Himself against Roelstra, Maarken against Masul, Pol against Ruval. Whole princedoms distilled down to two men. "Better one battling one than thousands battling thousands," she answered softly. It was the High Princess speaking, not the woman who had watched husband and nephew and now son go forth to their small, private wars.


This, I think, is to the heart of what the Dragon Prince trilogy is dealing with, which is the contradiction of Rohan's desire to be civilized and to make his world a better and safer one of laws while being continually forced to deal with men who refuse to accept anything but conflict and war.

Welcome to my final entry in my re-read series of the Dragon Prince trilogy.  We began four years ago with Dragon Prince and continued just last month with The Star Scroll.  Now we tackle the concluding volume with Sunrunner's Fire.  As before, this is less of a proper review and more of a re-read.  There is an excellent chance of book and trilogy spoilers, though I will attempt to limit (but not necessarily eliminate) those that touch on the Dragon Star trilogy.  You have been warned.  The quick answer is that I am a huge fan of these novels from Melanie Rawn and very highly recommend them. Go read, I'll still be here. 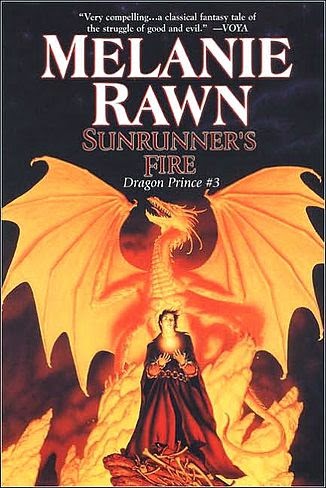 Something that I've been pondering since I finished Sunrunner's Fire a couple of nights ago is what if I'm looking at this whole trilogy thing wrong.  In a technical sense, this is the concluding volume of the Dragon Prince trilogy.  That's true.  But, to a point, Dragon Prince is a standalone novel that also sets up the potential for subsequent stories (as opposed to being a novel without a true conclusion). The Star Scroll and Sunrunner's Fire, however, seem more like one massive novel than two individual books.  To a point.  Each of those two novels have different focuses with character and story, but they tell more of the overarching battle against the sorcerers than they complete a fixed trilogy.

That's my side thought for the morning.

So, Sunrunner's Fire begins only days (40 days?) after the conclusion of The Star Scroll with the ceremony of Andry assuming formal command of Goddess Keep and all of the faradh'im.  Andry has had visions of the future, much as Andrade, the former Lady of Goddess Keep, has had.  Andrade used those visions to shape her actions to prevent a future that she did not want and to shape it into one that she did.  We never learned what most of those visions were, except that one involved her marriage to the High Prince Roelstra.  We do learn Andry's visions, however, and his visions are of a future at war and of the destruction of all that he loves.

Though that is not what Sunrunner's Fire is focused on, it shapes the actions of Andry.  It is a thread running through the novel.  It sets up the Dragon Star trilogy, though when I read this book for the first time I had no idea there would be more, but this is what forces Andry to act.  We know he is a young man given a whole lot of power without having sufficient time to be trained on how to use it wisely and humbly.  There is a streak of arrogance to Andry that, to a point is present in his whole family and in Andrade, but Andrade still had some political skill in maneuvering people to her own ends.  Andry is all blunt force without the political tact to work towards his goals, and since he firmly believes that war is coming in the future and only he can prevent it, he continues to push and alienate himself from his family.

Remember the sweet boy who loved his brothers so much it hurt in The Star Scroll?  That boy is gone and at each step, he feels like he is betrayed by his family even though he pushes them away by holding so tightly to the idea that everything he does is right and he is justified in all of his actions no matter the consequence.  It is difficult to read, to see how quickly he becomes "other".

In retrospect, Andry's story is the one I have spent more time thinking about in regards to Sunrunner's Fire even though it is the smaller story.

The larger story, of course, is that of Pol growing into a man and a ruler and of the sorcerers Mireva and Ruval (Ianthe's son) making their play to destroy everything that Rohan has built and to take their place as rulers of the continent.  It is Pol figuring out who he wants to be and that while he is likely to be a man and Prince that honors his parents, he won't exactly be the same sort of man and ruler that his father was. There is conflict there, especially as he begins to fall in love with the sort of woman his parents disapprove of as a future High Princess.

There is drama in the political wrangling, which is always a highlight with Melanie Rawn, and the characters we've been following and love don't get off easy.  Characters die, and very bad things happen to very good people.  From what I recall, that is only going to get worse in the next trilogy.  Sunrunner's Fire is compelling reading, and I think it's a bit more focused than The Star Scroll was.

But, back to Andry.  I don't think I'd want a whole novel from his perspective because I think he works better as seen in response to other characters than he would as an obnoxious lead character that we don't quite sympathize with.  He does, however, have a perspective that works towards a big picture that only he knows is coming.  The trouble is, he doesn't trust enough to share it because he's afraid he won't be believe or trusted himself. It's a vicious cycle, so all he tells people is that he has seen war coming and that everyone will need him in the future and that the ways he is twisting what the faradh'im have been is so very necessary and so is his personal war against the sorcerers.

What makes that so interesting, though, is at the very end of the novel when Andry goes on his little genocide is that one of the sorcerers had a letter written and while it was unclear as to who the recipient is, the letter seems to be about how the sorcerers could return to power not through conquest, but because Pol is of their blood, and Riyan is, and that with men and women of good character in ruling positions, they could reveal themselves and be protected by those rulers and also teach those rulers their ways.

It seems reasonable, though Andry would never see it that way.  It also shows that not all the sorcerers are like Mireva, striving for vengeance and murder.  Of course, the old woman who had that letter was also murdered by Andry, so I think what we are seeing is a lost opportunity.  Which, like most things with Andry, is sad.

And with sadness over Andry, we shall close out the Dragon Prince trilogy.

Stay tuned, because over the coming months we'll pick up with Stronghold and begin the Dragon Star trilogy.  Where I have read the three Dragon Prince books many times, I have only read Dragon Star just the once.  I'll be interested to see my perspective on that and see what I latch onto on my second time through.

Glad to see you've picked this up again; sadly, despite good intentions, I didn't start rereading this series (and then finally finish it!) a few years ago when you started. Anyway, just read your re-review of book 2, and now this one for book 3. I'm looking forward to the rest!

(I'm reading more ebooks now than I used to; I may need to pick up the ebook to get myself (re-)reading these books.)

Now that I've got some momentum for blogging and getting back into things again, I can say that you can probably look for the next Melanie Rawn reviews to pick up in a couple of months - no later. It won't be another break of years, I promise.

In promising news, I did just buy Stronghold and The Dragon Token from the used bookshop nearish me.