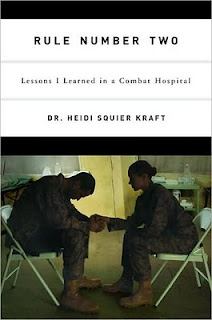 The title “Rule Number Two” refers to an episode of MASH where Henry explains to Hawkeye that “when he went to school for commanding officers, he learned that there are two rules of war. Rule number one is that young men die. Rule number two is that doctors can’t change rule number one.” (pg 133)

Dr. Kraft realizes that there may a third rule left unspoken. “War damages doctors, too. They are damaged by rule number two.” (pg 134)

This is the heart of Rule Number Two, the striving to heal and save Kraft’s fellow soldiers and the struggle to remain whole herself.

The seven months of Dr. Kraft’s service brings home both the pride of her service as well as the physical and emotional challenges of her service. Combat Stress brings comfort to the Marines through the trials of tragedy and trauma. Several times Dr. Kraft mentions how the Marines rely on and take care of their doctors, but she makes a point that as important as the Navy doctors are to the Marines, the Marines are equally as important to the Navy docs. These are HER Marines.

Through quick paragraphs every few chapters, Rule Number Two gives readers glimpses into the home life Dr. Kraft left behind to service in Iraq. She left fifteen month old twins in the care of her husband and her parents. These passages are poignant because as restrained as Dr. Kraft is with expressing just how she felt due to the separation, the e-mails from home frames everything else in her narrative.

Rule Number Two is a superior memoir and should be considered a must-read account of service in Iraq. Dr. Kraft brings a non-combat perspective to the reader and she does so with grace and skill.
Posted by Joe on Wednesday, April 21, 2010
Email ThisBlogThis!Share to TwitterShare to FacebookShare to Pinterest
Labels: Heidi Squier Kraft

This sounds excellent. I'll be adding it to my list of books to look out for (since I've already checked my library catalogue and they don't have it).

I have a general interest in PTSD (through the ages, under all its names--Battle Fatigue, Shell Shock, etc...) and psychological effects of the battlefield.

This book sounds right up my ally.

What spurred this reading? I have a few recent memoirs on my shelf. "On Call In Hell" by Richard Jadick. It's about a Marine Doctor's experience during the Battle of Fallujah. Lots of treatment under heavy fire.

"Long Survivor" by Marcus Lattrell; that's about a Navy Seal team being wiped out. Not a huge fan of the first half of the book--seemed like a Navy pamphlet--but the second half more than forgave the first half. Utter insanity unleashes and pretty much goes on until the end of the book. Very intense read.