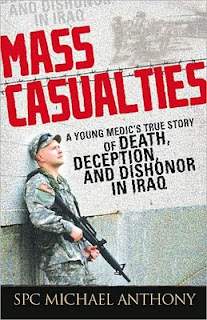 In the realm of books about military experience, readers are far more likely to encounter accounts from embedded journalists and first person accounts from front line soldiers than they are to find a memoir from an Army surgeon. Mass Casualties, subtitled "A Young Medic's True Story of Death, Deception, and Dishonor in Iraq" is the operating room perspective from the current Iraq war.

Filled with youthful idealism about what life in the Army was life, Michael Anthony enlisted in the Army at age 17 to serve his country and follow a family tradition of military service. His year in Iraq was nothing that he expected. Anthony faced ineffective and sometimes petty leadership, other soldiers acting out and acting dishonorably, and the general danger of being in a war zone.

Viewed from the perspective of a memoir providing another wartime account, Mass Casualties is a valuable book. Anthony’s base was under repeated mortar fire and the memoir gets at the stresses placed on the soldier on base. Equally important, Mass Casualties provides a glimpse into what a poorly run and dysfunctional Army unit is like and what the impact is on the morale and psyche of the soldier.

To understand whether Anthony’s experience is an aberration or the norm of the Army, a much larger survey of returning soldiers would be required. It should safe to say, however, that even if that Michael Anthony’s experience was atypical of soldiers who were not on active patrol, it may not have been an unusual experience . . . even if the Army’s upper echelon would never, if they only knew, condone some of the poor leadership Anthony encountered.

As a memoir, and as a book of the modern military experience, Mass Casualties is not as well written as other books on the market. A memoir is not likely to hold up well next to a piece of professional journalism (think Generation Kill or The Interrogators), so that wouldn’t be a fair comparison. But, other memoirs such as My War: Killing Time in Iraq, by Colby Buzzell or Philip Caputo’s Vietnam classic A Rumor of War are more accomplished works and provide a better comparison.

What Michael Anthony offers here is a perspective easily overlooked next to a movie focusing on a bomb squad, embedded reportage, and memoir from combat soldiers patrolling the streets of Iraq or fighting in Afghanistan. Anthony’s voice here is quite valuable, especially as he recounts the experience of the Army pushing Anthrax pills on soldiers despite medical evidence suggesting serious risk.

Mass Casualties may not be a top shelf military memoir, but readers looking to understand different facets of what the modern soldier faces will do well to take a look at this book.