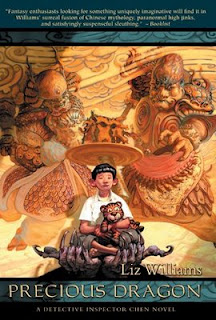 
It is difficult to write about Precious Dragon. Or, more accurately, it is difficult to give a brief overview as to what the basic story of the novel is because there several things all going on and the same time. A young actor / prostitute hires out to a private party and finds himself snatched to Hello. Detective Inspector Chen and his demon partner Zhu Irzh investigate, but are then sidetracked when they are ordered to travel to Hell with a Celestial Warrior from Heaven. Some sort of diplomatic thing / invitation, though it is not entirely clear. A human woman is asked to look after her dead daughter’s son (though the daughter has been living in Hell for years). The son is not quite normal, though early on the reader does not know in what way. Also, there is a dragon swimming the rivers and canals of Singapore Three.

That’s what is going on at the start of Precious Dragon, the third Detective Inspector Chen novel.

The rest? Well, that's how Liz Williams weaves it all together. Early on in Precious Dragon there is a sense that Williams is just throwing stuff out there, but we have to trust that there is a reason for the random dragon swimming its way through Singapore Three, and that Chen and Zhu Irzh will somehow get back to the case of the missing actor boy. I'd be willing to suggest that the opening of Precious Dragon is perhaps a bit too scattered and that the lack of focus can be a turn off.

Yes, by the end of the novel it's clear that Liz Williams has her story well in hand and pulls together all the threads, but that might be part of the problem. This is only clear as the reader comes nears the conclusion of this relatively short novel. For the first two thirds (or so) of Precious Dragon the reader is left wondering how in the world all of this stuff, most of which is quite interesting, pulls together. Chen and Zhu Irzh in Hell with the Celestial? Golden. The quiet moments of the missing boy in Hell? Very nice. The sections with the precocious Precious Dragon (the character) and the old lady? Less so. The dragon swimming? Interesting, mostly. The trouble, which I'm not explaining well, is that there is little sense of a coherent narrative or storytline running through Precious Dragon.

That's the only real negative here. Both Snake Agent and The Demon and the City were more focused novels and thus stronger. Precious Dragon still provides the Chen / Zhu Irzh fix, and there is plenty of conspiracy between Hell and Heaven, with the fate of humanity in the balance. There's some outstanding stuff here. The lack of narrative focus, in this case, does hurt Precious Dragon. It could have been better. It could've been a contendah. Er. Strike that last sentence. Precious Dragon is good, but the first two are better.

Even with the lack of narrative focus, one thing that should be acknowledged is that Liz Williams refuses to rest on a formula for this series. She could do Demon-of-the-Week novels and run it out 18 volumes and I suspect many readers (including myself some days) would be perfectly happy. She doesn't. Liz Williams stretches and experiments and tries to tell a bigger story in a different way and not narrow the method of storytelling. Even when it doesn't completely work, the effort and attempt need to be acknowledged and appreciated. It's still enough to make me go read Shadow Pavilion.