Shamblings Towards Hiroshima, by James Morrow 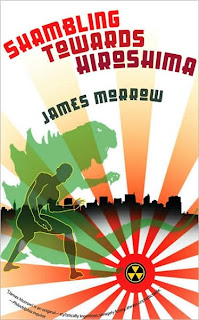 Summer 1945. No end to the war in the Pacific is in sight. Syms Thorley, a horror movie actor most often seen in a monster-suit or under layers of makeup, is recruited to join the war effort. Thorley joins Project Knickerbocker (but don’t talk about it in public, if you have to say something, say you’re working on the New Amsterdam project – yes, bonus joke there). Project Knickerbocker is a planned ending to the war with Japan, one that will end the war with a minimal loss of American lives. You know this story. You know what the secret weapon is.

Oh. Was that not what you expected?

James Morrow wrote an absolutely absurd sort-of-alternate-history set in the waning days of the Second World War. The most absurd aspect of Shambling Towards Hiroshima is Project Knickerbocker and the Giant Lizards slated to invade Japan and wreak destruction upon large Japanese cities. Godzilla-like. This idea is the underlying concept of Shamblings Towards Hiroshima and it is pure delight. Yes, the specter of atomic bombs is ever-present. As is the knowledge that the Godzilla-flicks can be viewed as a partial response to America’s dropping atomic bombs on Hiroshima and Nagasaki. What kind of story is being told where rather than dropping atomic bombs America is considering dropping, so to speak, Godzilla on Japan?

What does that mean for how Shambling Towards Hiroshima will play out? The role of Syms Thorley in Project Knickerbocker is to once more don the suit of a giant monster. This time to portray the giant lizards so fiercely that Japanese diplomats will report the threat back to Emperor Hirohito and stop the war before the lizards ever need to be unleashed on Japan. Syms Thorley is used to great comic effect as he is a sarcastic mess who takes great pride in his work while taking little else truly seriously. Or, perhaps he just does not take himself seriously and this allows him to joke on everybody else. Regardless, Syms Thorley romps through Shambling Towards Hiroshima and makes reading about Project Knickbocker a joy. A joy that is tempered with a bit of sorrow of potential horror, of course, because what else is Godzilla but a nuclear allegory (and a product of nuclear fallout)?

Tachyon’s website (and the novel’s jacket copy) has this to say about Shambling Towards Hiroshima:

In the dual traditions of Godzilla as a playful monster and a symbol of the dawn of the nuclear era, Shambling Towards Hiroshima blends the destruction of World War II with the halcyon pleasure of monster movies.

It should go without saying that the above sentence is nothing more than promotional material designed to sell the book, but it won’t. It’s worth mentioning. It is also worth mentioning that the above sentence is also a very accurate summation of what readers can expect from Shambling Towards Hiroshima: a novel that is, on one hand, a short and pleasing read set mostly in a more innocent time, and on the other hand a thoughtful examination of the horror of how America ultimately ended World War II. It also suggests that no matter how the United States ended the war against Japan, there were likely other options in development which we have never heard about. Perhaps even giant fire breathing iguanas.