The Fires of Heaven, by Robert Jordan 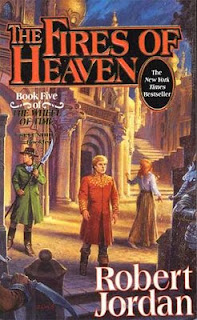 The Fires of Heaven
Robert Jordan
1993

Supposedly the answer is somewhere in The Fires of Heaven. I can’t figure it out. Not with anything I would consider a reasonable theory.


It began in The Shadow Rising, but in The Fires of Heaven Jordan makes a point to show Rand as forcing himself to be “hard”, to do what he feels he needs to do in order to get to and survive the Last Battle. For readers (or, perhaps just for this reader) this begins a distancing effect towards Rand. A character forcing himself to be uncaring and hard is a difficult character to engage with. This is not so much of a problem because the side characters are the real stars of the show.

The Fires of Heaven, more than The Shadow Rising, is also where Jordan begins to slow down and drag out the series. At this point I do not mean that as a negative, but rather as my perception of the pacing of the storytelling and action. There is more sitting around and waiting. To be fair, The Great Hunt opened with a chapters-long waiting in Fal Dara sequence, but the perception becomes more pronounced here. Adam Whitehead had this to say about The Fires of Heaven and the story arcs Jordan appears to be using.

With The Shadow Rising, Robert Jordan moved The Wheel of Time series out of its 'adventure' arc into a 'political' phase as the characters finally moved into positions of high authority and influence amongst different nations and cultures, and could begin the process of uniting the world to face the Last Battle. Whilst adventure storylines would continue to appear, a lot more time from this point onwards would be spent on political maneuverings. Indeed, some storylines would unfold almost entirely within a character's office as they fired off letters, received intelligence, and debated strategy. That, at this stage anyway, Jordan is able to make this readable and compelling is a testament to his often-underrated storytelling skills.

I think Adam is spot-on here. This is more of a political phase. The Shadow Rising opened with the politics of Tear and moved into that of the Aiel. The Fires of Heaven opens with the Aiel and the growing threat of the Shaido Aiel and Couladin’s hatred and fear of what Rand represents and shifts focus slightly when Rand takes his Aiel across the Dragonwall into Cairhein and we get a combination of a siege and Cairhein politics. Cairhein, of couse, is a city / state that just cannot catch a break from the Aiel.

And yet, Robert Jordan does not provide the nitty-gritty of politics. What Jordan provides is Rand running rough-shod over Cairhein, just as he did Tear. Taking control through the strength of who and what he is. Through Rand’s need to be hard and his need to unite the nations behind him before the Last Battle. Through force, if needs be. The political aspect is there, and is only going to grow, but Jordan does not forget about major plotpoints and action.

There is a conversation between Mat and Lan in which Mat lays out strategy for a battle that closely mirrors what war-leaders came up with independently. Mat, of course, is nothing more than a young man from Emond’s Field who never saw war or danger until Moiraine saved the three from Trollocs and the Fade. Nothing more except a young man with memories of lives he never lived and unnatural luck. Mat has been a character who has become more and more interesting with each passing book, but now he becomes the general and leader he never wanted to be. There is no good reason why Mat should be this special, but he is and the novel (and series) is all the stronger for it.

Other moments of note that make The Fires of Heaven stronger as a whole than each of its individual parts might suggest: Rand and Aviendha (in general, but the…sequence through the snows of Seandar), Asmodean’s end, Nynaeve vs Moghedien Pts 2 and 3, Birgitte ripped out of TAR, the return to Salidar, Elayne performing in Valan Luca’s circus, the resolution of Couladin but not the Shaido, the Band of the Red Hand forming against Mat’s desires, Rand vs Rahvin, the use of balefire, and most importantly – Moiraine vs Lanfear. This last bit has set years of theory and rumor about the ultimate fate of Moiraine, a fate that for years was not addressed in series until Knife of Dreams opened that door again. There’s big stuff here.

The quiet moments of the novel, the ones where all the characters are waiting for something to happen? Well, that’s where The Fires of Heaven drags a bit. I still feel like the high point was in the first four volumes of this series, but The Fires of Heaven is overall still a satisfying novel. One which still pushes the reader into wondering what will happen next. One which isn’t perfect, but is still a good story, a good book. One which still raises more questions than answers, and that the questions are just as fascinating as the answers might ever be.


Unfortunately, I’ve put a stop to my official Nynaeve Braid Count. I wanted to keep track of it, but midway through the book I stopped paying attention to it and after I remembered I counted three by page 150 but nothing after it and that I wasn’t even looking. What disappoints me is that after googling this, I have not found an official count. I would really, really like a book-by-book breakdown of Nynaeve’s braid-tug-count, because unless it gets worse, I think it has been overstated by many (including myself). I just can’t verify the count in The Fires of Heaven. Sorry about that.


Previous Reviews
The Eye of the World
The Great Hunt
The Dragon Reborn
The Shadow Rising
Posted by Joe on Sunday, March 15, 2009
Email ThisBlogThis!Share to TwitterShare to FacebookShare to Pinterest
Labels: Robert Jordan, The Fires of Heaven, The Wheel of Time

It feels like decades since I've read this but it's really only been a year or so. Thanks for the update. Maybe I can pick up the series again soon.