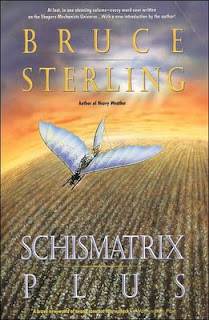 For the sake of this post I am going to focus solely on Schismatrix (mostly because I haven't read the short stories yet).

Originally published in 1985, Schismatrix is the last fiction Sterling wrote in the Shaper /Mechanist Universe, though it is the first section of Schismatrix Plus. Schismatrix is a future looking piece of science fiction, one that shows a possible evolution of humanity, beyond earth, beyond nationality (mostly) and into technological ideology. I am still a bit confused as to the true distinction between the Mechanists and Shapers and who, exactly, was who. For clarification, I checked wikipedia and Shapers use organic modification (gene therapy and the like) for their vision of humanity, and the Mechanists use more traditional technology and are viewed by Shapers as backwards.

Into this very unclear (in the text) futuristic setting steps Abelard Linsdsay. He is the "hero" of our story and is, at the start, a young (I think) and idealistic Shaper who ends up exiled from his homeland and becomes what is called a "sundog", which would be Sterling's version of an outlaw from the American West - someone living on the fringes of society and not quite on the legal side.

Larry wrote a good review of the novel, and I'm very glad, because I'm kind of at a loss of what to say about it. Mostly, my issue is that I was frequently at a loss as to what exactly was going on. Sterling jumps years, decades into the future and despite having time stamps that reveal the year (sort of), it's still difficult to figure out when stuff is happening, where, and how it relates to the overall world.

Actually, if not for the book club, I probably wouldn't even have made this post. I don't feel up to Schismatrix. Joe: 0, Schismatrix: 1.

Sterling is not telling a straightforward story of Point A to Point B, where the actions on Zaibatsu or the Fortuna Miner's Democracy are not the be all / end all of the novel. Sterling is writing about ideas, not plot or "story". But, since i'm not sure I understood the story I think I missed most of the ideas.

To me, Schismatrix is a story about competing ideologies and this may be my projection, but with competing ideologies it becomes unclear what people are really fighting for. Is the idea really that powerful? History says yes, but when even the definition of the ideology isn't clear in the novel, the power is lessened.

I'm not going to explain the ending for those who haven't read it and may still want to (Larry may sell the novel better, and Fabio certainly will), but despite all the weirdness of the novel and perhaps the ending being telegraphed a bit (says Daniel Ausema in the comments), but for me that was ALL deux ex machina in the sense that what Lindsay does is in no way assumed possible until it happens. What the hell?

So, this isn't a very good review (actually, it isn't really a review, just some random thoughts I had about the novel), I know that. If I have anything to say about the stories, I'll post those thoughts.

The two novels in the Book Club so far have been fairly intellectual, which isn't a bad thing, but neither Camp Concentration nor Schismatrix would be considered "accessable" to the average SFF reader. They challenge, both in content and in requiring the reader to push on and work to understand the story the author is telling. I fear that in both cases I was somewhat mastered by the novel.
Posted by Joe on Thursday, December 11, 2008
Email ThisBlogThis!Share to TwitterShare to FacebookShare to Pinterest
Labels: Blogger Book Club, Bruce Sterling, Schismatrix, Schismatrix Plus

I wonder how much a difference it would have made if you'd read the stories first. I debated which order to go and chose to read them in the order he wrote them, so I was less lost at the start of the novel than you were.

I don't know that I would say the ending was telegraphed--I'd actually say it was fitting thematically...but yes, certainly Deus ex machina as well (as was the original appearance of aliens when the Investors showed up).

Hmmm, I wonder if there's a reason there. You might argue that aliens showing up will always seem like a god-like event to the people involved. That they will, briefly at least, take the role of gods in our minds.

Well, when the Investors showed up it was clear they were swindlers...and aliens appearing isn't too shocking of an event in science fiction set out in the cosmos.

It was that last "alien" thing and with a simple conversation, how he evolved (for lack of a better word) Lindsay.

It may have fit thematically (actually, it perfectly fits the character of Lindsay), but I'm not sold on it in terms of fitting the story / storytelling.

I had a pretty similar reaction to this novel. I didn't read the short stories either. Perhaps that would have helped to set the story up in a more cohesive way, but I was pretty lost through much of the story.

If not for the book club, I probably wouldn't have finished it. I'm happy that I did though. It got better as it went along, and it felt good to challenge myself as a reader.

And my opinion of the stories is that if we were supposed to read them first they would have been placed before the novel...so either the publisher or the author deliberately chose that order as the preferred way to read the Shaper / Mechanist world. And, if this is the complete works of Shaper / Mechanist, maybe novel then stories is the right way for a new reader to experience it.

Although I read the stories after the novel, I would have to say that they work independently of the novel, although reading them does give some insight into what Sterling wanted to discuss. I believe that despite the deus ex machina-like scenes, he also wanted to show that there were no panaceas and that all events bear consequences that may be far-ranging and unpredictable.

But do read the shorts. Those are a bit clearer. As for the "intellectual" charge for this novel, well...it was extremely popular in certain SF circles almost 25 years ago, so I don't see how your claim that it wouldn't appeal to the "average SF reader" would hold up, unless you're making the argument that the writing style, characterizations, and story motifs are dated in feel.

I'm not entirely sure what argument I'm making here...though I think I could have stated the part about the average SF reader...

I guess because I consider myself an average reader and I was challenged by it, and confused, that I didn't see the mass appeal.

Though, you say it was extremely popular in "certain" SF circles, but without knowing what circles those are, I don't know that your argument about the mass appeal holds up either (I suspect you are more right than me, if I'm being honest).

You can make a case that Jeff Vandermeer's Ambergis fiction is "extremely" popular in certain SFF circles, and you'd be right...but to then suggest that Ambergis appeals to the "average" SFF reader would be a reach. Yeah, he's well regarded and a World Fantasy Award winner, but the "average" reader isn't reading VanderMeer.

None of this is meant as an attack on Jeff, and I suspect he would say that he doesn't write for the average reader...and that's more than fair.

But, that's kind of what I wonder about Sterling and Schismatrix.

I was thinking in a historical sense - Sterling was a seminal cyberpunk writer along with Gibson, and his stories appeared in Omni, Interzone, and The Magazine of Fantasy and Science Fiction among others. From what I've gathered, he was quite popular among those in the old days who wanted some shift away from the relics of Golden Age mindsets but who also desired to see at least some emphasis on space opera-like settings.

So when I was talking about "certain SF circles," I was referring to magazines like Omni that were a bit more "forward-thinking" than was Analog (Asimov's was still relatively new back then). It was the second part of the 1-2 cyberpunk punch (Neuromancer being the first) and knowing this history makes the "average reader" comment a bit anachronistic. Today, yes, many might struggle with its themes and its tones, but when it was written, it precisely the sort of thing that quite a few SF readers (think of the ones who decide the Hugos, for example, and their mindset, as they were in their 20s and early 30s when Sterling's book came out) wanted. That's what I was noting in my first response.

I agree with Larry. I think we could even consider Schismatrix the wavefront of the "New Space Opera" movement of recent times - and we´re not even considering his two earlier novels, Involution Ocean and The Artificial Kid, which are really good novels.

Larry - that makes sense. I'm not sure I have another thought on that right now. :)