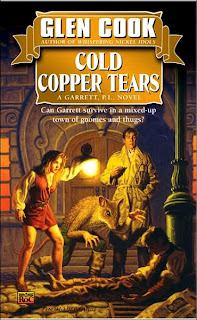 
The third entry in Glen Cook’s Garrett, P.I. series once again keeps Garrett close to home, though unlike the first two books Garrett’s investigations in Cold Copper Tears only tangentially relate to the two cases Garrett is contacted about. I say tangentially because there is a relation, but what Garrett investigates is a result of being contacted for those cases and not in the pursuit of those cases. If that makes sense. If it doesn’t, let’s just say that Cold Copper Tears follows Garrett on a series of investigations for which he is not being paid or contracted for.

After being attacked by members of the Vampires street gang, Garrett contacts Maya, the young leader of the all female gang the Doom (The Sisters of Doom), for assistance. It turns out that the Jill Craight, the woman who hired Garrett to investigate a break in at her apartment, was once a member of the Doom and now has gone missing. She is connected to Magister Peridont, the man who failed to hire Garrett for the other case.

Connections are everything and even though Garrett is no longer directly investigating the case he was hired for, Cold Copper Tears is a fairly straightforward story. The readers knows as much as Garrett (not much), but throughout the novel Garrett is pushing forward to a) find out who tried to kill him and why, and b) where Jill Craight went. Accompanying Garrett as something of an apprentice is Maya. The expectation with the introduction of Maya's character is that she would be a plucky (if profane) sidekick for Garrett and not much more, but within a couple of chapters Maya turned out to be one of the best characters in the first three books and one who showed a fair amount of development even in this one volume.

As readers should come to expect with the Garrett P.I. novels, Cold Coppers Tears is smoothly written and filled with snarky smart characters (and dumb ones, too). They feature crimes and mysteries that need to be solved and as I'm not one who figures out the whodunnit before the end, trying to figure out what is going on in the story is half the fun. The other half of the fun is visiting and revisiting favorite characters such as Dean, Morley Dotes, and The Dead Man. While sleeping for much of the novel, The Dead Man gets a fair amount of development in terms of what exactly a loghyr (even a dead one) can do and what the potential of that race is. Fascinating stuff.

Once again Glen Cook has delivered an outstanding fantasy / detective novel and once again he leaves the readers both satisfied and wanting more.

Hi Joe, I've read Glen Cook for many years, but I started with the Dread Empire,which I enjoyed more than you did (but that was 20 years ago! It was more of a breath of fresh air then, than it is today).

I only got around to reading Cook's Garrett books this summer. I started Sweet Silver Blues in June, and by October I had read through #10, Angry Lead Skies. Now I'm taking a break, and rereading the Dread Empire books, before reading the last two Garretts.

I needed a lot of help from ebay and the local library to get used copies of many of the Garrett books, but it was worth the effort. And you personally are in luck that book #4 Old Tin Sorrows is now available in reprint form, with #5, Dread Brass Shadows, due out in reprint the first week of December. (#6, Red Iron Nights, has been scheduled for reprint around summer 2009).

I think your comments on the Garrett books are dead-on. I thought the first four were great, the fifth wasn't as good as the first four, and the sixth was an improvement on the fifth, but not as good as the first four. The seventh, Deadly Quicksilver Lies, was again better, while the eighth, Petty Pewter Gods, was like a break for Cook. He did a more whimsical storyline, perhaps out of boredom. He was recharged for the ninth, Faded Steel Heat, which was one of the very best of all.

That's more than enough for today, I just wanted to give you a hint of what you might find as you keep reading, if your experience continues to mirror mine. Thanks for all of your work on your site!

Yeah, I've got serious issues with the first three Dread Empire books, but am loving the Garrett series.

It's interesting to get your take on the series as a whole. Much of the series isn't available directly in my library system so I've been getting them through inter library loan. I guess that helps keep me from overdosing on the series.