The Dragon Reborn, by Robert Jordan 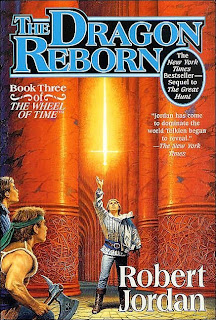 So far in the series the reader has known the Rand is, or will be, the Dragon Reborn, the prophesied hero who will "break" the world even as he saves the world from The Dark One. At the end of The Great Hunt Rand proclaimed himself as the Dragon and those who were at Falme (and lived) saw Rand battle Ba'alzamon in a vision in the sky. Rumors of Rand with crude drawings of the battle are racing across the land. Sick of fighting the dreams and unable to control saidin, Rand journeys to Tear so he can somehow take callandor, the "sword which is not a sword" in the Stone of Tear. This will be a major public fulfillment of prophecy and more than the vision of battle, will proclaim Rand to the world as being the Dragon Reborn.

In a bold move, except for a small handful of scenes, Robert Jordan pulls the focus off of Rand and places it firmly on Perrin, Mat, and the girls. Despite the fact that novel is titled after what Rand is, and the fact that knowledge of Rand permeates every aspect of the novel, Rand is barely in The Dragon Reborn. It is strangely refreshing. Moreover, pulling the focus off of what can be viewed as the primary and most important character of the series could mess with the overall rhythm of the series, but somehow it works.

There is a lot to like in The Dragon Reborn, some which only take on extra importance knowing what happens in the next eight volumes, others feel important but we don't know why, and yet others that are just interesting. Oh, and the story is good, too.

Jordan does an excellent job at foreshadowing certain events, both for the series and for the book. Early on, Lan mentions that "The Dark One has killers you don't notice until it is too late", the "Soulless". There is mention of balefire. Small comments, but there is a sense by this point that Jordan is introducing elements that will come into play later in the novel, or later in the series. With Jordan there is no telling which, but in these two cases the elements will be introduced in The Dragon Reborn.

One of the major storylines of this novel is that Suian Sanche, the Amyrlin Seat herself, sets Nyneave and Egwene on a mission - to hunt the Black Ajah in the White Tower. With Elayne in tow, this hunt takes them from the White Tower all the way to Tear. Actually, even though the characters begin the novel in different places and doing different things, they will all end up in Tear together. At times this feels a bit forced, but Jordan's storytelling is so strong that much of this doesn't matter.

One of my favorite aspects of the series, and of this book in particular, is the transformation of Mat. He begins the series as Rand's best friend and a weasely little prankster. He turns out to be ta'veren, one who shapes events and pulls people towards him. Early on Mat yelled phrases in the Old Tongue, but now, that Mat has been freed of the taint of the Shadar Logoth dagger, he has been changed somehow. There is no explanation if this is something that would have occured in his life anyway, or if the dagger changed him. But now Mat speaks more and more of the Old Tongue, has incredible luck, is able to hold off two master swordsman with just a quarterstaff (excellent scene, that one), has visions of past lives, and is proving to be one of the strongest characters in the series.

Regarding Mat, the Amyrlin relates a story of her uncle that perfectly describes who Mat is and who he will be throughout the series.

The Amyrlin gave an exasperated sigh. "You remind me of my uncle Huan. No one could ever pin him down. He liked to gamble, too, and he'd much rather have fun than work. He died pulling children out of a burning house. He wouldn't stop going back as long as there was one left inside. Are you like him, Mat? Will you be there when the flames are high?

He could not meet her eyes. He studied his fingers as they plucked irritably at his blanket. "I'm no hero. I do what I have to do, but I am no hero." pg 183

That's Mat. Perfectly captured in two paragraphs that imprinted so strongly in my memory that I waited for that conversation ever since I first read those words.

There are character introductions in The Dragon Reborn: Julian Sandar, Faile, and Aviendha. Important characters, each. The Forsaken. We find out that more of the Forsaken are loose and in some cities and countries - they rule.

The only aspect of The Dragon Reborn I really didn't like was for the first time in the series, Nyneave began to tug her braid in anger or frustration. It's become a long running joke about the series, but it begins here, on page 93. Nyneave tugs her braid eight times. Given that Jordan switches the POV chapters around, it feels like more and it is only going to get worse.

One last thing to note - the end of the book features a quote form The Fourth Age. Ths is is a song fragment "Composed by Boanne, Songmistress at Taralan, the Fourth Age". Taralan. Tar Valon? Does this relate in anyway to the "Great Aravalon" mention in Lord of Chaos? It is something that will never be answered, but I wonder all the same.

Despite the absence of Rand, or perhaps because of it, The Dragon Reborn is one of the strongest entries in the series (though I have immense respect for Book 4, one sequence in particular). This is a point where even people who later become disillusioned with the series are still fully engaged and fully in. This is Robert Jordan still at the top of his game and, to use a cliche, firing on all cylinders.


Previous Reviews:
The Eye of the World
The Great Hunt
Posted by Joe on Tuesday, November 18, 2008
Email ThisBlogThis!Share to TwitterShare to FacebookShare to Pinterest
Labels: Robert Jordan, The Dragon Reborn, The Wheel of Time