The Gypsy Morph, by Terry Brooks 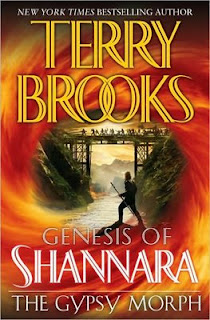 Terry Brooks wraps up his Genesis of Shannara trilogy with The Gypsy Morph. This is the trilogy which is intended to start the bridge between his Word / Void trilogy and world of Shannara. With Armageddon's Children Brooks began the bridge, opening in an America crumbling not just at the seams, but at the center. With the fallout from nuclear war transforming the survivors and civilization as we understand it all but gone, the first steps towards Shannara have been taken (was this the Great War hinted at in those first Shannara novels?). Two Knights of the Word were called and given various tasks from helping the gypsy morph himself, a boy named Hawk leading a ragtag street gang of children named The Ghosts, and saving the Elves. Thus, the two series have been combined. Armageddon's Children was about Hawk and the Ghosts (while introducing Logan Tom, a Knight). The Elves of the Cintra introduced elves, continued the previous story, and brought a second Knight onto the scene in Angel Perez.

Brooks must somehow bring it all together in The Gyspy Morph and while Armageddon's Children felt like as much of a return to form as I can possibly expect from Terry Brooks at this stage of his career, The Elves of the Cintra was a step backwards again. Dare I raise my expectations of what The Gyspy Morph could be? The last twelves year of Shannara has taught that disappointment is the most likely end result.

In my review of The Elves of the Cintra I had this to say, and I think it bears repeating.

Terry Brooks has become very hit and miss and my thought is that the closer he gets to Shannara the faster he tells his stories and the less detail he provides, the less rich his storytelling becomes. It was only, I believe, the fact that Armageddon’s Children was very near a Word / Void novel that Terry Brooks gave the level of detail and, dare I say, care to the novel that he had not done since Angel Fire East.

So. The Gypsy Morph.

The first chapter was interesting in that it was apparently unrelated to the rest of the novel, except that clearly it isn't. Chapter One features a man named Wills, the last survivor in a military compound and he has the keys to launch the remaining nuclear missiles of the former United States of America. He's cracking under the pain and loss and the despair of being alone and while he isn't ready to give up hope and launch the missiles, he still might. That's the backdrop which plays behind the rest of the novel and it is worth keeping in mind when we get too wrapped up in the stories of Logan Tom, Angel Perez, and the Elves.

The Gypsy Morph feels like a desperate rush to impossible safety. Continuing the story on from The Elves of the Cintra, Kirisin (an elf) carries all of Arborlon, the entire elven race, in the Loden Elfstone, knowing only that the Knights of the Word will lead him to someone who will lead him to a place of refuge. The Ghosts follow the newly revealed Gypsy Morph, their friend and leader Hawk, a boy who is really a being of magic. Chasing them all are demons led by Findo Gask, the demon who hunted John Ross and Nest Freemark.

Realizing that there is no ending Terry Brooks could possibly have written that would have fully satisfied fans of the Word / Void novels AND Shannara, or fully set the stage for the Shannara series, The Gypsy Morph isn't bad. It doesn't live up to the promise of Armageddon's Children and certainly does not stand as one of the best novels of the Terry Brooks ouevre, but it is still one of his stronger novels of the last decade. That should count for something.

What works here is that after the opening several chapters which move about as slowly as the injured Angel Perez, the story picks up when the action does. Stasis is a bad thing for Terry Brooks, but once he begins to move his characters around and get into the chase / escape mode, well, the man can tell a good story. There is character growth mixed with action, and if sometimes Brooks describes the obvious, he keeps the story moving. That's the key to The Gypsy Morph - the story keeps moving and the reader keeps turning the pages. Recent novels do not have the depth of the Brooks's earliest work and do not share the emotional power of the Word / Void novels, but The Genesis of Shannara does build a bridge that satisfies a bit more than the longtime reader might have expected.

In short: hey, it doesn't suck.

In slightly longer: when the reader can forget this is about to become a Shannara novel, the book has potential. That it never quite lives up to the potential and hopes of the Word / Void reader is perhaps to be expected, but this is a solid effort from Brooks. Perhaps the best we can expect these days.

Previous Reviews
Armageddon's Children
The Elves of the Cintra
Posted by Joe on Friday, November 21, 2008
Email ThisBlogThis!Share to TwitterShare to FacebookShare to Pinterest
Labels: Genesis of Shannara, Shannara, Terry Brooks, The Gypsy Morph