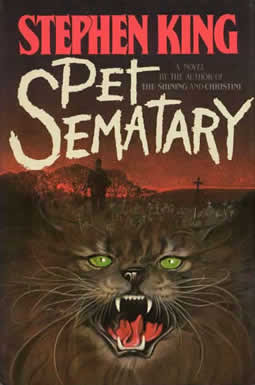 
When I was no older than ten years old I saw the movie adaptation of Pet Sematary and it scared and scarred me so much that for the next fifteen years I wouldn’t go anywhere near a Stephen King novel. I knew the basic outline of the story, though there is no telling how faithful a film adaptation actually is. What terrified me the most about the movie wasn’t the cemetery itself or what happened because of it, though a couple of cemetery related scenes are burned into my mind. What terrified me the most had to do with what I thought was an old lady living upstairs named Zelda. Zelda struck fear and sickness into my ten year old heart.

It should be pointed out that Zelda is not central to the movie OR the novel, but for a ten year old, this character was the most vivid and caused me to almost dread picking up the book.

Louis Creed moves his family from Chicago to rural Maine. Creed is a doctor and will be working in the medical department of the local university. Since this is a Stephen King novel, moving to Maine (or simply living in Maine) is generally a very bad thing. Shortly after arriving at his new house he meets his eighty-something year old neighbor Jud. Jud quickly becomes a close friend for Louis and shares some of the local lore, including the fact that the highway right off the front yard is a noted pet killer as semi-trucks speed down the road. Jud also shows Louis the dirt path behind the house that leads through to town. On that path is a pet cemetery, only the sign is spelled “sematary”. This is where children from town bury their pets. The Creed family is made up of Louis, his wife Rachel, 6 year old Ellie and even younger son Gage. And a cat. Given the title, we know what has to happen to the cat.

This is what makes Pet Sematary such a scary novel. It’s not the boogeyman lurking in the shadows and it isn’t knowing that a killer is on the loose. What makes Pet Sematary scary is anticipation. A college student dies in a car accident early in the novel and it gives Louis bad dreams. Louis is on edge and because this is Stephen King and because we expect the cat to get killed and that the cat will only be the start, we’re anticipating the bad things to come and what shape they might take. There are premonitions of death. But, when the cat finally is killed on the road and buried, as it has to be, at the pet cemetery, when what happens next occurs…that is when the real horror of the novel begins. Anticipation. When the cat dies the reader knows exactly what is going to happen next, but we don’t know when and that keeps us on edge the entire novel.

The whole thing with Zelda? Scary for Rachel (it’s a flashback to her sister), but not horrifying in the same way that the images and the sounds were in the movie. For that, I’m grateful.
Pet Sematary is one of the Stephen King horror novels where somehow not a lot of horror actually happens. Most of the novel is the story of Louis and his family adapting to life in Maine with the new neighbor, and then the business with the cat, but that’s the first three quarters of the novel. It’s a good novel and is in the same vein of Christine in that the really bad stuff doesn’t occur until the end, but is not quite as strong a novel as Christine. Pet Sematary is a good Stephen King novel, a solid effort, and at times absolutely horrifying in the expectation of what is to come. Pet Sematary is nowhere near my favorite Stephen King novel, but it’s pretty good all the same.
Posted by Joe on Thursday, November 06, 2008
Email ThisBlogThis!Share to TwitterShare to FacebookShare to Pinterest
Labels: Pet Sematary, stephen king

How funny that you just put this up. I mentioned this book just last week in one of my posts. Mostly because my cat was just hit by a car and killed last week. (sucks). But still.

Very sorry to hear about your cat.

I read this book when I was in 9th grade? Somewhere around there. It scared the hell out of me. I couldn't even bring myself to watch more than 15 minutes of the movie...but it didn't help that I was alone in the house at night when I turned it on. :p

I remember reading this book and the bit where the coffin falls and then opens revealing the kid - put the heebie jeebies up me. It's a brilliant book and really makes the reader feel the father's loss.

That scene was brutal, as was everything with the father-in-law.