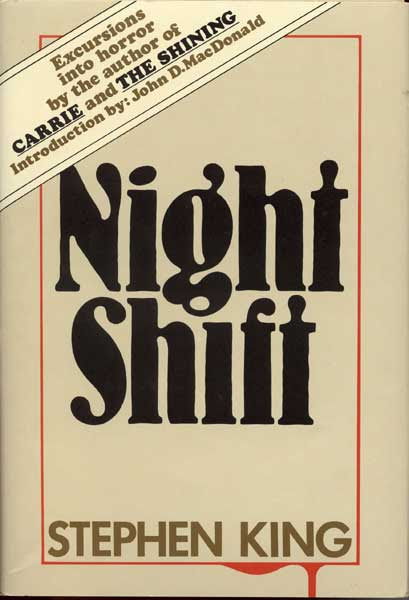 Night Shift, by Stephen King: This is King’s first collection of short fiction and nearly all of the stories are entertaining and have elements of creepiness. The thing about this collection is that each story takes one idea and runs with it. For example: “Trucks” deals with people discovering that trucks have all become sentient and intent on killing humans and a group of people are trapped at a gas station (apparently this is the genesis of the idea which will later lead to Christine and From a Buick 8). The stories are hit and miss, but mostly hits. “Children of the Corn” is a genuinely creepy / nasty story. I think it is the evil children thing. The best and most imaginative story in this collection, however, is one that has generally been unsung – at least to my experience, is “Quitters, Inc”. This story has a mysterious company with a guaranteed success rate for helping people to quit smoking. I expect King’s later collections to improve, but while Night Shift was slightly underwhelming, it was still a good read.

The Colorado Kid, by Stephen King: Two aging newspaper men in a small coastal community tell a story to their young, new coworker, about one of the town’s true mysteries, that of the man they nicknamed The Colorado Kid. The novel unfolds like two men telling a story and while there are hints of darkness, it is really a simple story, not quite like one of Plato’s dialogues but along those lines. The Colorado Kid would likely read well as an audio book. This is a low key novel and is a quick and easy read, which is good because it doesn’t quite merit excitement.

The Bottoms, by Joe R. Lansdale: A bit of a mystery here when two white children find the corpse of a black woman in the South in the 1920’s. Who did it and will he strike again? The racial atmosphere is tangible. The Bottoms is very well written novel, as is everything Lansdale writes, and while it was a very good book I could only read it in smallish chunks of 30-40 pages at a time before putting the book down again. I could not stay in this setting for any length of time. Landsale readers will note the connection to his novella The Boar, which is set nearby. I am unsure if this is before or after that story. Impressive work of fiction, but smaller doses of reading was required.
Posted by Joe on Wednesday, December 05, 2007
Email ThisBlogThis!Share to TwitterShare to FacebookShare to Pinterest
Labels: Joe Lansdale, Night Shift, stephen king, The Boar, The Bottoms, The Colorado Kid