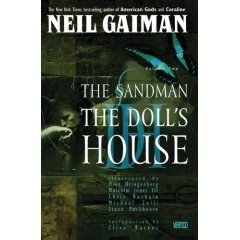 The Sandman: The Doll’s House, by Neil Gaiman: I am not the ideal reader for graphic novels. I want more text and description and plotting through the narrative and here the image tells as much of the story as the text boxes do. I don’t have a good feel for The Sandman, but because of its influence and “importance”, I want to actually read them all. This is the second volume of Sandman stories. I preferred the first, overall, though there were some impressive moments in this collection.

The Bonehunters, by Steven Erikson: Here we get back to those aspects of Malazan which I am able to most engage with and figure out. The remnants of Dujek’s Host, the last of the Bridgeburners, Ganoes Paran, and the armies of Adjunct Tavore Paran. Besides this, we get more Apsalar, Fiddler, Quick Ben, and Kalam. Near the end of the novel Kalam really gets a chance to shine and shows why the assassin is such a legendary character and why he is so feared. Oh, and there is more Karsa Orlong, which is always a good thing. So, what is it about? Difficult to say. Erikson pulls together some threads and begins to set up the final three volumes of The Malazan Book of the Fallen and the overall war against the Gods (for lack of a better term) that some people are beginning to see coming. It is becoming exceedingly difficult to talk about the Malazan novels because increasingly I am more and more confused as to what, exactly, is occurring and to whom. This is why when Erikson narrows the focus back to the Malazans I am most able to understand. Overall The Bonehunters was mostly interesting and mostly coherent, but this sixth volume is not a good place to begin the Malazan series. The first five volumes are required reading (though Midnight Tides still chafes quite a bit) before reaching The Bonehunters. I am becoming slightly disillusioned with Malazan, and I only hope that when the ten volumes are complete I will better be able to understand what it is that Steven Erikson is trying to do here.