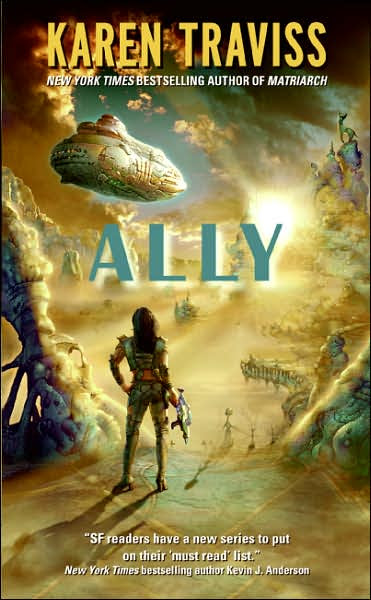 With Ally Karen Traviss delivers the fifth entry in her Wess'har Wars series. The aliens are now one step closer to Earth and the Wess'har will cleanse and rebalance life on Earth...which will result in significant loss of human life (but salvation for the other forms of life on the planet). Shan Frankland, once a police officer, a "copper" in her words, once a human much like any other, is, and has been for several books, much more than human. She identifies much more with the Wess'har and due to her infection of c'naatat Shan is nearly immortal. She can die, but even stepping out in the vacuum of space is not enough to kill. Shan's ideas about conversation and the value of the lives of non-humans fall in line with much of Wess'har. She is also married to a Wess'har, Aras, who is also infected with c'naatat and has been alive for five hundred years, and to a human soldier, Abe, who suffers the same fate. Shan knows that she cannot return to Earth ever because humanity should not have access to c'naatat.

But this is only one aspect of what is going on and only identifies who Shan Frankland is. There is war on Umeh, the home planet of the isenj, and the Wess'har have been invited to restore Umeh to a natural balance, but they have not been given full permission to cleanse the planet as they would wish. So, there is conflict on the planet as some of the isenj revolt against the isenj leadership, but in that revolt they pit themselves against the Wess'har and ensure the destruction of the isenj. On Bezer'ej, the world known as Cavanaugh's Star, there is a different problem. The world is in balance and though the bezeri have been nearly exterminated by a couple of humans and a big mistake, there are still survivors and Lindsay Neville, the guilty party here, was infected with c'naatat to serve the survivors in the oceans. Lindsay wonders if that service could be to save the bezeri by infecting these creatures, once thought harmless but recently discovered as overhunters who have destroyed eco-systems, and bringing them on land.

There is less a sense of discovery and raw excitement than there was in the first entries of the Wess'har Wars. This is only to be expected as Traviss is telling an ongoing story and not introducing the reader to an entirely new culture and worldview. One thing that Traviss does well to keep her novels fresh is that each novel introduces something entirely new and shattering which changes everything for the next novel. Earlier in the series it was infecting Shan with c'naatat, infecting Abe, the near destruction of the bezeri, killing Shan (which obviously didn't work), the planned invasion of Earth by the wess'har, and infecting Lindsay and Rayat. Because c'naatat is nearly impossible to eliminate (but it is possible), having more characters infected each with different views on life and what should be done with c'naatat, everything changes. All of this helps keep the series fresh and leaves the reader to end a novel with something shocking and spend the next year wondering what will happen next.

So what about Ally? Well, Traviss gives us our shocking event which changes everything. Something about Ally felt far more compelling than the previous volume, Matriarch. Perhaps it is the sense that in Ally something is really happening and the overarching storyline of bringing the Wess'har to Earth may actually happen in the series. There has been a sense of stasis in recent volumes where there was a bit of a question of whether or not Traviss would actually write about the Wess'har getting to Earth. Real progress on that storyline has been made now. Add this progress to the already fascinating ethical discussions and actions of Shan, the Wess'har on Umeh, the bezeri, and the possibility of Earthly invasion and what we have is an improvement in the series and a step back to what we had in the first three novels. There is simply a greater sense that things are happening in this novel than in the previous one and this leads to greater satisfaction with the novel.

Unrelated to the review: Beautiful cover.
Posted by Joe on Saturday, May 05, 2007
Email ThisBlogThis!Share to TwitterShare to FacebookShare to Pinterest
Labels: Karen Traviss, Wess'har Wars