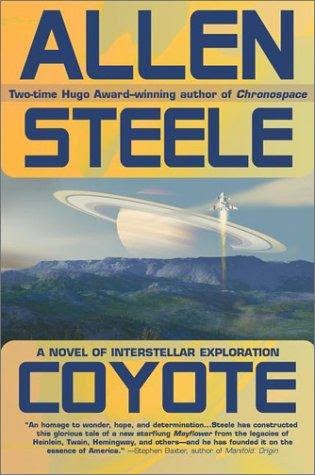 One of my favorite things in all of science fiction is a good colonization story.  Any chance to dream about mankind's first venturing out into the stars and find a new home is a welcome one.  There are so many different ways and political possibilities that lead towards sending out a colony ship to another world that even a mediocre novel can be thrilling to read.  The sending out of the ship, the (sometimes) generation ship and everything that can go wrong, waking up from stasis, the first landing and that wonder and fear, and the founding of the colony with its first days and years of struggle, all of it is compelling just from a conceptual standpoint. Do it well, however, and a writer can hook me from the word go.

Allen Steele's 2002 novel Coyote is a fix-up of previously published stories, mostly from Asimov's. In pieces and from different perspectives, Steele tells the story of how a Captain in the United Republic of America set to lead a colony ship does just that, but also co-ops the jingoistic mission of the URA and leads a coup that switches out 50 of the colonists with "dissident intellectuals" who have been persecuted by the policies of the URA.  There is quite a bit more to the political situation back on Earth and the Second American Revolution, but while it informs the the situation in the novel, it is also the background material of the novel. But, this is the sort of thing that I enjoy, the future speculation of how our world changes.

Things go wrong, but not irrecoverably so, and so there is the challenge of a new world.

The cover of the paperback edition I read had the tag "A Novel of Interstellar Exploration", and that is exactly the feeling that I got from Coyote.  Exploration.  Discovery.  Adventure.  Survival.

To a point, a number of characters in the novel came across as a bit simple and one-note, and the resolutions to some conflicts also felt a bit too pat and neat, but reading Coyote left me wanting to read more.  Luckily, there are a number of other Coyote novels which follow this one.  Seeing how the colony adapts and changing political landscape is one of the treats of the novel (and of this sort of novel).  I look forward to the next Coyote novel from Allen Steele.

Posted by Joe on Tuesday, May 20, 2014
Email ThisBlogThis!Share to TwitterShare to FacebookShare to Pinterest
Labels: Allen Steele