The Divergent Series, by Veronica Roth 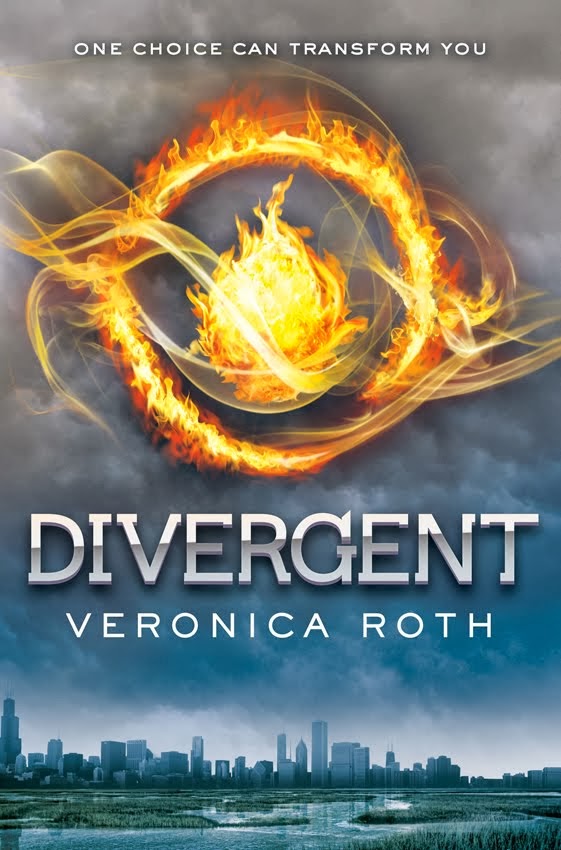 The opening premise of Divergent, written by Veronica Roth, is that in some dystopian version of the future the population of a city is divided into five factions that are based around personality traits.  Those factions are Abnegation, Amity, Candor, Dauntless, and Erudite.  Readers figure out very early on that this city is Chicago, though the implication is that perhaps this is what the rest of the world is like.  Families are raised in factions, but when the children reach the age of 16 (or so), they are able to choose which faction they would like to belong to.  The first novel follows Tris Prior as, not quite a spoiler, she chooses the risk-loving Dauntless faction over her family’s selfless Abnegation faction. That's the cliff notes version of the background, there's a bit more going on than that, plus the meaning of what the title means in the setting of the novels.

There is a lot to like about the Divergent series.  This is a fast paced story that frequently leaves you wanting to know more and to read just one more chapter before stopping.  Divergent is fun, despite having some darker and gloomy elements to the society and the overarching story.  To that point, it is reminiscent of The Hunger Games, to which it will inevitably be compared because of the YA branding of the series as well as because of the forthcoming movie.

I wonder if the farther away from my own teenaged years (I turn 35 in three weeks), the less I am able to identify whether younger characters are accurately portrayed.  Are my frustrations with teenage characters a frustration with the writing or the frustration of a man who will one day be yelling at those same kids to get off his lawn?  The protagonists of Divergent, and the series, are often impulsive.  But then, they are members of a faction that prize recklessness.  Or, they are teenagers.  The romantic entanglements of Tris, and others, were one of the more frustrating parts of the series.  Part of it is the writing (one character noting to himself that each touch has meaning, that they don’t touch just to touch), but part of it might just be teenagers in love.  At some point, and I suspect I am long past this point, I can’t connect with that adolescent view of love and relationship.  Don’t get me wrong, I do think that these romantic elements are not all that well written, but I am also far from the age where I can recognize that emotion as being exactly correct.  As such, oh, teenagers.

What I very much appreciated about this series, though, is how Veronica Roth is unafraid to continue to open up the world and completely change the nature of what we know and to continue to raise the stakes.  I’m sure her publisher would have been very happy to throw out various faction-era novels and continue to roll in some money, but Roth is building a much bigger story and is touching on a small exploration of prejudice (not very robustly, but it’s there).

On the whole, the Divergent series is a mixed bag but works as entertainment.  Worth reading, but not with an unhesitating recommendation.
Posted by Joe on Tuesday, February 11, 2014
Email ThisBlogThis!Share to TwitterShare to FacebookShare to Pinterest
Labels: Veronica Roth

It's funny, I thought the romance were some of the best written parts of Divergent, though I agree that overall it's a mixed bag. Then again, I might just have been really grateful that there was no love triangle. Unfortunately, I was not as impressed with Insurgent and haven't yet read Allegiant. Have you read them yet?

Yep, I've read the whole series. I enjoyed the first one best and the next two in decreasing amounts.

I just didn't want to go into much detail on the next two books.