The Star Scroll, by Melanie Rawn 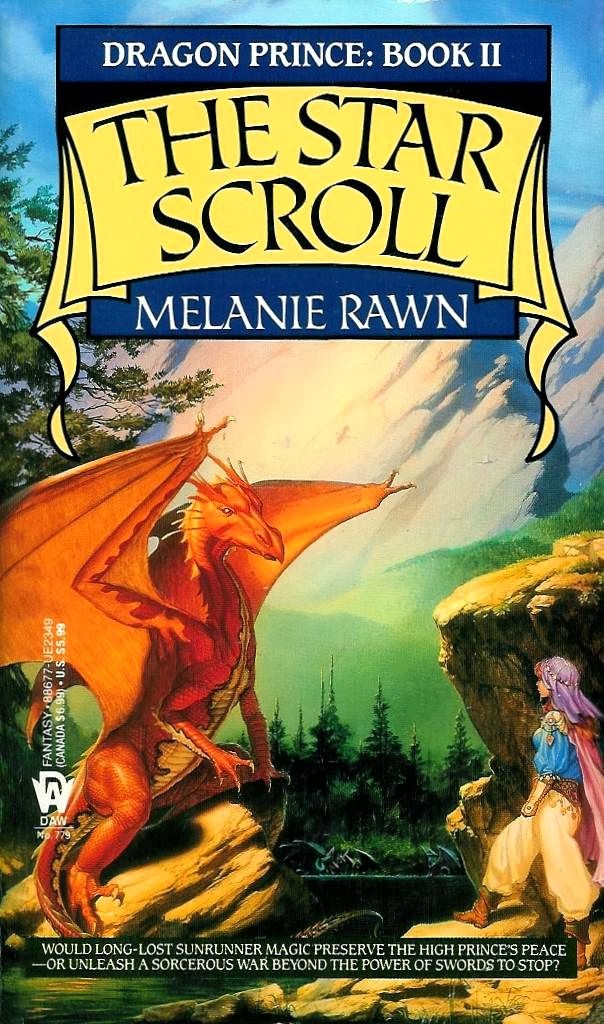 Almost four years ago I wrote about Melanie Rawn's debut novel Dragon Prince, which has long been one of my favorite fantasy novels and one of the few which I occasionally come back to and re-read.  At the time I suggested around that time that this would be the beginning of a re-read series of posts covering the full series.  For no particular reason that I can think of, I did not immediately follow Dragon Prince with the rest of the series, and then the next few years became complicated, and I just never returned to the series and the re-read.  Until now.

As with Dragon Prince, this entry will be less of a proper review and more about my overall impressions of the novel and what it evokes in me, especially this being the fourth or fifth time that I have read it.  As such, spoilers will abound, though more for this particular volume than the rest of the series.  You have been warned.  My memory of the rest of the series is incomplete. It may be worth noting that this is the first time I have read Star Scroll in at least ten years.  If not longer.

If you're on the fence, don't be.  Don't read what's below, just go read Dragon Prince and continue on with The Star Scroll.  This is top notch fantasy.

One thing that jumped out at me more from re-reading my writeup of Dragon Prince is that The Star Scroll does not have that prominent villain to latch on to that Dragon Prince did.  Dragon Prince had the High Prince Roelstra, one of the great villains in fantasy literature.  I will argue that point all day long if necessary.  The Star Scroll has hidden sorcerers.  Oh, there is plenty of villainy to be found here, but it isn't the same.  I would suggest that it is less necessary because now we are fully invested in the characters.  Rohan and Sioned are familiar and comfortable and their dreams as rulers are our dreams as readers.  We want them to succeed and build that peaceful society and make their world better.  The nature of the conflict is different.

There is a discovery of several scrolls on the island nation of Dorval, the ancestral home of the Sunrunners (for lack of a quicker description, this world's magic users - see my previous post).  The scrolls tell of long lost history, of a war against sorcerers who ruled the mainland, of a different sort of forbidden magical power.

It is not this discovery which sets events in motion, Melanie Rawn is far too good of a writer to do that.  But, this discovery is a way to inform the reader as the characters are learning about a bit of history that might not be completely in the past.  The scrolls are a set up for the reader, a hint that Rawn is changing the nature of the game here.

But, back to the villains.  There are two, really.  One is a character named Masul, who is claiming to be the son of long dead Roelstra, and thus having claim to the princedom claimed by Rohan for *his* son, Pol.  Masul is a bit of a prominent villain, but the underlying one here is Mireva - one of the sorcerers looking to reclaim some power and completely upset the current order of things in the world.  She is working multiple plots at once, attempting to subvert the Sunrunners, remove Rohan and family from power, and to set up a puppet of her own as the real power in the land in attempt to bring the long dormant sorcerers back into the light.  That is a gross simplification.

Only one of those two storylines is resolved in The Star Scroll, the other (that of Mireva) will continue on into Sunrunners Fire.  To be honest, I really couldn't remember how that part moved forward, though I did remember it being a big thing.  It's just not what you hang the book on.  We're not reading to see how that particular storyline develops (as we were with the conflict between Rohan and Roelstra).  We're reading to see how our heroes (as a generic term) rise to the occasion, to see how they develop, how Pol grows.

One of the best storylines in The Star Scroll is actually that of Andry, the son of Chay and Tobin (sister to Rohan).  To quickly reduce all sorts of stuff, Andry is young (perhaps 20), and is tapped to be the next Lord of Goddess Keep when the current Lady, Andrade, dies.  Andry, like Andrade, has all sorts of family ties to the ruling family, but as a Sunrunner, he has other loyalties.  From the rotating tight third person perspectives in this novel, we see Andry go from fondly thinking about his "beloved older brother" to becoming almost estranged from his family when Andrade is killed and he is still given the full rule of the Sunrunners at such a young age.  We can see the drift, and perhaps because I knew it was coming I can notice more those earlier moments when Andry is trying to hold on to his family and just be a brother and a son - and I know that the estrangement is coming.  I know that the change is painful, and it is heartbreaking to watch happen even though you get the sense that Andry is kind of a dick, but he's also young and immature.  Which is awkward for the man who is now a major power in the land.

The other great bit (in a book filled with great bits) is Sioned and how she is using her powers to initially touch, and then communicate with a dragon - something that had never been even considered.  It isn't a major point of this novel, but it's so beautifully done and frightening and thrilling that it just has to be mentioned.

I don't love The Star Scroll in the same way that I do Dragon Prince, but from the start this is a gripping fantasy that from the first word I fully immersed myself into and did not want to stop until I had turned the final page.  From these first two books, Melanie Rawn is a master and should be mentioned far more often as one of the great fantasy writers.


As a side note, given how much I love the Dragon Prince cover and that it was one of the first pieces of fantasy art that made me actually notice fantasy art, the cover for The Star Scroll is fairly disappointing.  It shows an important scene of the book, but it doesn't really differentiate this as being any different of a book than, say, Anne McCaffrey's Pern novels (which are very good, but not at all the same sort of thing).  Of course, Michael Whelan did do a number of the covers for The Dragonriders of Pern and McCaffrey herself did blurb Dragon Prince, but still.  The cover here lacks that sensual and exciting feeling of that awesome piece of art he did for Dragon Prince.  Perhaps it is not a fair comparison, that is, after all, one of my favorite book covers of all time.
Posted by Joe on Monday, February 24, 2014
Email ThisBlogThis!Share to TwitterShare to FacebookShare to Pinterest
Labels: Melanie Rawn