The officially official news on this one is a week old by this point, but I did want to take the time to point out that Elizabeth Bear's One Eyed Jack will be published on August 13, 2014.

The One-Eyed Jack and the Suicide King: personifications of the city of Las Vegas—its history, mystery, mystical power, and heart…

When the Suicide King vanishes—possibly killed—in the middle of a magic-rights turf war started by the avatars of Los Angeles, a notorious fictional assassin, and the mutilated ghost of Benjamin “Bugsy” Siegel–the King’s partner, the One-Eyed Jack, must seek the aid of a bizarre band of legendary and undead allies: the ghosts of Doc Holliday and John Henry the steel-driving man; the echoes of several imaginary super spies, decades displaced in time; and a vampire named Tribute, who bears a striking resemblance to a certain long-lost icon of popular music. 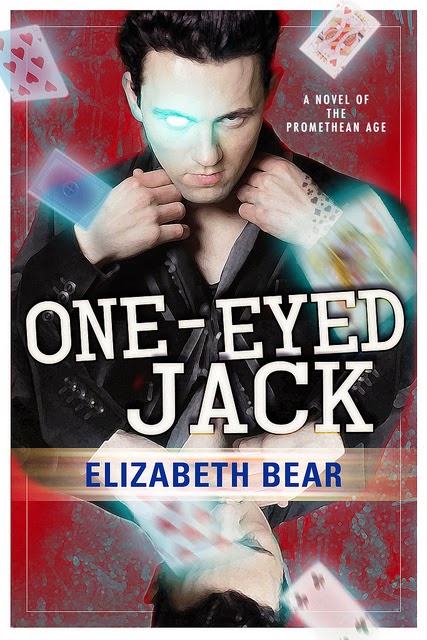 Folks, I seriously love Bear's Promethean Age novels and when Roc decided not to publish any more after the first four, it was assumed that the series had a great run, but that was it.  Prime stepped in and is taking a shot on Bear's standalone One Eyed Jack.  That's right, standalone.  Just because you haven't read any of the first four, this is your entry point.  Though, I do heartily recommend the other novels.

Blood and Iron or Ink and Steel are each two excellent places to start with the series as they are the first books in their respective duologies.

I have previously reviewed each book in the series.
Blood and Iron
Whiskey and Water
Ink and Steel
Hell and Earth

But that's the past (and what a wonderful past it was).  One Eyed Jack is the future.  I absolutely can't wait to read it.

Posted by Joe on Thursday, February 27, 2014
Email ThisBlogThis!Share to TwitterShare to FacebookShare to Pinterest
Labels: Elizabeth Bear, The Promethean Age

We From SEO SUPER Wowo Introduces Its Sales Sells Herbal Products Men And Women ALL PRODUCTS FROM our clients in Down's.