So, I was looking for some new comics to put on my reading list and I happened across this post on MTV.com.  It's not where I normally would have thought to check, but I'll be damned if there's not some good looking stuff on that page. 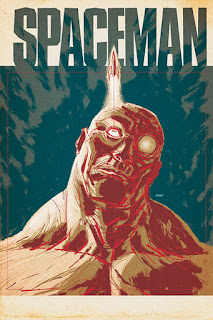 A number of books haven't been collected yet and some are just beginning (Xenoholics, anyone?), but what caught my eye was something called Spaceman.

Spaceman is written by Brian Azzarello and drawn by Eduardo Risso.  That's all I really needed to know.  You should know Azzarello from the hella ambitious 100 Bullets, or from a number of other comics, but really - 100 Bullets.

The AV Club has a very recent interview with Azzarello.
Posted by Joe on Monday, November 14, 2011
Email ThisBlogThis!Share to TwitterShare to FacebookShare to Pinterest