The Outback Stars, by Sandra McDonald 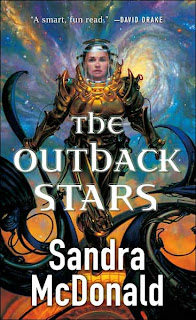 First up was David Gemmell's Legend.

Next up is The Outback Stars, by Sandra McDonald. I read this at the end of September.


Sandra McDonald described The Outback Stars and its two sequels as “sf military romances” and, well, fair enough. That aspect is certainly present in The Outback Stars. The more I think about that description, the better it fits. The Outback Stars is all three, with no one part of that overwhelming the others.

From the back cover:


Lieutentant Jodenny Scott is a Hero. She has the medals to prove it – and the scars.

She's cooling her heels on Kookaburra, recovering from the fiery loss of her last ship, the Yangtze, and she's bored – so bored, in fact, that she takes a berth on the next ship out. That's a mistake. The Aral Sea isn't anyone's idea of a get-well tour.

Jodenny's handed a division full of misfits, incompetents, and criminals. She thinks she can handle it. She's wrong. Aral Sea isn't a happy ship. And it's about to get a lot unhappier.

What I think about when I think about The Outback Stars is the interpersonal drama of The Aral Sea, Jodenny's struggle to bring a sense of military discipline and decorum back to her new unit and how she is undermined by others who should be leaders. McDonald goes much deeper than that, in the end, but the day to day struggle of Lt Scott was the core of what worked best for me. McDonald herself is a former Navy officer and that working knowledge of the day to day life of a junior officer comes through in her writing. She isn't writing dry military minutiae, either. There is real conflict that is core to the story being told in the novel. It works.

There really isn't a weak aspect of the novel. The SF, military, and romantic elements of The Outback Stars all come together to tell a singular story which I really didn't want to end. Fantastic novel and one which I wish I didn't wait so long to read. The Outback Stars was one of those novels that was on my list of books I'll get to “sometime soon”. Sometime soon became several years. Now I only need not to wait so long to read the sequel. Very good stuff here.
Posted by Joe on Saturday, November 05, 2011
Email ThisBlogThis!Share to TwitterShare to FacebookShare to Pinterest
Labels: Catching Up, Sandra McDonald

That sounds good. I haven't read much military SF but I have enjoyed those novels that I would classify as such, Scalzi's Old Man's War series and more recently Tanya Huff's Valor series. Just finished the third of those last night.

I've seen these books before but didn't know much about them. After your description though I am thinking they must be added to the list.

I really liked it. I don't think it would fall into a hard military SF classification (neither does Scalzi, of course), and I think that's a good thing.

I'm not sure I would enjoy hard military SF. Then again, don't knock it until I try it, right? I know I've looked at the McDonald books in the past because of Donato Giancola's stunning cover art.