This is the third in that series of posts. 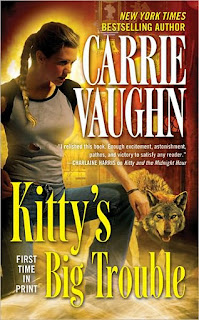 I read Kitty's Big Trouble back in July. I've been reading Carrie Vaughn for the last five years and Vaughn has maintained my interest and excitement from the first book. Kitty's Big Trouble is the ninth novel in the series and continues Vaughn's expansion of the scope of Kitty's world.

Kitty's Big Trouble opens with Kitty's belief that William Tecumseh Sherman was really a werewolf and her investigation into that, but it extends into San Francisco to get deeper into the looming war with Roman and is minions. Vaughn explores the depth of what Kitty (and the reader) knows of the supernatural in this world.

After all these months, what I most want to convey about Kitty's Big Trouble is that there is no drop in quality in this ninth Kitty Norville novel. Vaughn continues to deliver a fast paced, entertaining story which builds what the reader knows of the world while not neglecting the ever developing characterization of all the recurring characters.

When I stop to think about it, Kitty's Big Trouble reads as an episode in a television series. The novel itself is a singular episode which tells a particular story and has a beginning, middle, and end. Carrie Vaughn puts the story first and doesn't fail to tell a good one. But, the novel also succeeds in the context of the larger Kitty Norville series. Kitty Norville is not a static character, but rather develops based on experience. The Kitty readers met back in Kitty and the Midnight Hour is not the same Kitty in these more recent novels, though the journey is clear. Bit by bit, Carrie Vaughn explores this world which seems so similar to our own, if not for the presence of the supernatural. Kitty, like the readers, have only scratched the surface of what all is out there. This is the heart of the sense of discovery in the Kitty Norville series. Through the “Adventure of the Week” stories, Vaughn works the larger thematic, character, and overall series arcs to deliver a multi-layered experience.

Kitty Steals the show is due out in Spring 2012.