All the Windwracked Stars, by Elizabeth Bear 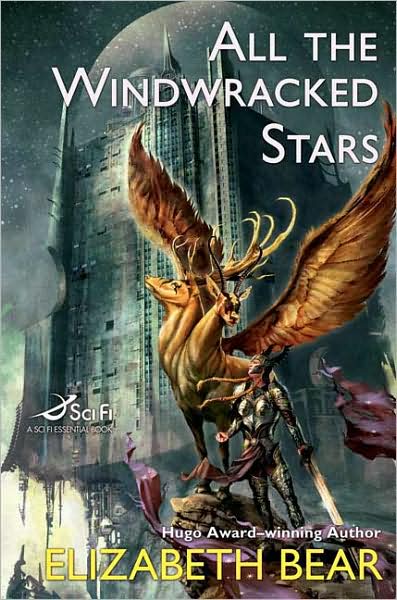 Elizabeth Bear described All the Windwracked Stars as "periApocalyptic Norse steampunk noir high fantasy." According to the words of Bear, periApocalyptic means that the story "takes place after, during, and before the end of the world. In that order, yes." The rest of the description can be parsed out fairly easily, though there is always a question as to what those terms mean in regards to All the Windwracked Stars.

The novel opens in the wreckage of the first apocalypse, where the Valkyries, the Children of Light, battled the Tarnished Ones until there were no more Valkyries left on Valdyrgard. Except one. Muire. Muire and one Valraven, Kasimir, a steed of the Valkyries. Do not assume, however, that because Elizabeth Bear uses the term "valkyrie" the path of this novel is obvious, because it is not. Yes, All the Windwracked Stars is steeped in Norse mythology and this informs the language of the text. We get the Old English "waelcyrge" and part of the mood is the terms Bear uses to tell her story: Ragnarok, waelcyrge, herfjotur - words which sound alien to an American reader but which have a history and which are used to create a world which never existed.

Some two thousand years later Muire still walks Valdyrgard, has rejected Kasimir, and once again Valdyrgard is dying. The Technomancer, viewed as despot and savior, somehow holds together one of the last cities and of the remnants of humanity. Mingan the Wolf, seen at the last Apocalypse, is also walking the city and Muire begins her hunt.

All the Windwracked Stars is one of those novels which, for me, has a very slow build, a slow burn. After the two thousand years pass and the reader is dropped into a different story than the opening chapter, Bear takes some time to reveal what the basic story is. According to Bear,

It stars a valkyrie who has gotten herself shipwrecked in time, a kickboxing gigolo, a kitten with a whip, a two-headed iron horse, and a nihilistic wolf, and it's about all sorts of things--the differences--or lack thereof--between service and slavery being one of them.


There is a such a disparate group of characters, each with their own motivations and desires (and, since this is an Elizabeth Bear novel, each with their own pain), that the reader may be a bit lost early on. Bear reveals things in her own time, and while this is no different than her Promethean Age novels, it is the alien-ness of the Norse terms which causes the first third or so of All the Windwracked Stars to be an initially difficult read.

Finishing the novel is rewarding, however. All the Windwracked Stars is worth the effort to push through and see this world that Bear is developing. The novel works as a standalone novel, but it is also the first volume in a trilogy: The Edda of Burdens. This is perhaps the most remarkable aspect of All the Windwracked Stars - the conclusion turns any expectation for the rest of the series on their head. I refuse to spoil the conclusion, and this is a difficult novel to talk about the overall plot anyway, but one of my thoughts after finishing the novel was "where the hell is she going to go from there?"

All the Windwracked Stars is not essential reading as her Promethean Age novels are, but it is a strong, solid novel on its own. The next two volumes may affect how AtWS is viewed, but for now, it is worth a shot. I cannot give it my strongest recommendation, but Bear is always worth reading.
Posted by Joe on Friday, October 10, 2008
Email ThisBlogThis!Share to TwitterShare to FacebookShare to Pinterest
Labels: Edda of Burdens, Elizabeth Bear