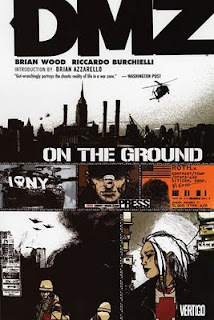 One of the graphic novels that has me the most excited right now is DMZ. DMZ is written by Brian Wood and imagines a near future America which has suffered through a second Civil War. A militia in Montana rose up and nobody thought much about it or took it very seriously until, almost without anyone realizing what had happened, the Free States of America had already taken over much of the country. Now, in the time of DMZ the Free States of America have pushed all the way into New Jersey until a stalemate was reached.

Manhattan island was closed off and considered a demilitarized zone. Manhattan island became a war zone with warlords and parts of the city becoming impenetrable. Chinatown, for example, closed itself off from the rest of the city and became a private enclave. Open areas were to be avoided. The Free States and the United States had their areas and accesses to the city, but in general, nobody was allowed out.

Enter Matthew Roth, a young photo journalism intern (with parental connections) who is sent into the Manhattan, the DMZ, with a Liberty News crew. Think of Liberty News as a version of a FOX News, a not at all impartial news network in the United States. The news crew is one of the first to enter the DMZ and report from the ground. Upon landing, the crew is attacked and killed and Matty is left on his own. Because of his press credentials and because he is the only one left, Matty continues to report (as he can) from the DMZ and becomes something of a celebrity both inside the DMZ and outside.

The story of Matthew Roth and the DMZ is far more complicated than that. Matty was rescued by Zee Hernandez, a former medical student who stayed behind in Manhattan to continue to help the victims of the bombings and attacks in the DMZ. That’s the set up. Through the initially innocent eyes of Matthew Roth readers are introduced to the world of the DMZ, an urban battlefield with no law, no oversight, and very little true hope. But even that isn’t entirely true. This is New York City and the people survive as they can. They are suspicious of outsiders (which Matty initially is), but in a variety of authentic ways, they band together and try to get by while their city is the last frontier of the war between the Free States and the United States of America. 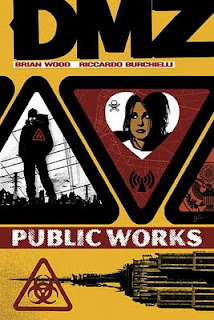 DMZ deals with entitlement, terrorism, war crimes, politics, elections, and a private security organization named Trustwell which has a striking resemblance to Blackwater. At no point does Brian Wood shy away with tackling difficult and complicated issues and the perceived moral ambiguity about what is right on the ground versus what is right from the perspective of the United States government. It’s not that easy and it isn’t clear. The warzone is different from the inside.

This is gripping, gritty, raw, and painful storytelling. The world of DMZ is all too plausible. Matthew Roth may be the “hero” of this series, but he’s just a man. Roth is young and sometimes naïve. He makes mistakes, he is betrayed (and betrays in turn), and sometimes his best efforts results in more damage than if he had stayed out of it. He’s just like us, only with just a little bit more gumption and luck. But that’s the thing. This is, at its heart, a story about America. ALL of the characters are just like us because the ARE us. Even then, this isn’t just a story about America. It’s a story about people and it is analogous to other occupied cities in the world.

I’ve had the chance to read the first six collection editions (covering the first 34 issues of DMZ) and I can say that if this is not considered one of the top comic series running today, people don’t know what the hell they’re talking about. It’s that damn good, and I would even suggest that DMZ is an important comic series.
Posted by Joe on Tuesday, October 06, 2009
Email ThisBlogThis!Share to TwitterShare to FacebookShare to Pinterest
Labels: Brian Wood, DMZ

You almost make me want to read it, but this is so not my kind of story at all. I'm trying to think of any comics I love besides Transmetropolitan that don't have some kind of supernatural element...

I didn't think it was really up your alley, but it's damn good.

You could also argue thatn Transmet is sci-fi (series set a couple hundred years in the future, lots of tech that's not quite possible yet)

Yes but still not supernatural, not in the way that Hellblazer or Preacher etc are.