Crossroads of Twilight, by Robert Jordan 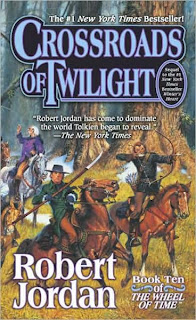 On my first reading of Crossroads of Twilight I was satisfied with the novel, that even though the action of the novel is lacking and Robert Jordan did not build on the Cleansing in Winter’s Heart, it was Wheel of Time and it told the stories of characters who caught short shrift in the previous volume. Only later, thinking back on the novel, did I feel a sense of disappointment that except until the very end of the novel could I say that “nothing happened”. My complaints grew. Maybe we didn’t need to be caught up with all the other characters. There’s nothing wrong with jumping ahead a couple days or a week and just picking up then.

The first half of so of the novel runs concurrently with the conclusion of Winter’s Heart. There is this great “beacon” off in the distance that tells any woman who can channel that a great use of Saidar is being used. Readers of the series know that this is the Cleansing of saidin, but the other characters don’t. The general assumption is that the Forsaken are involved and when the Aes Sedai scout out battlefield after the fact, they assume that what happened at Shadar Logoth is some new Forsaken weapon. Otherwise, there are four primary storylines running through Crossroads of Twilight.

Perrin continues to chase the Shaido Aiel who have kidnapped his wife. Elayne works to hold on to the Lion Throne in Andor and is facing a siege from rival houses. Mat tries to evade the Seanchan in his flight from Ebou Dar. Mat also works to improve his relations with Tuon, the Daughter of the Nine Moon. Egwene and her rebel Aes Sedai are outside the gates of Tar Valon. She’s working on a plan to block the harbor at Tar Valon.

Which isn’t to say that there isn’t quality here. When Robert Jordan gets down to it, he can write excellent scenes and put together a good book. Most of this book just isn’t Jordan getting down to it. The White Tower intrigue works, as does the burgeoning (and confusing) Mat and Tuon relationship. Elayne’s chapters are turgid, but the closer Egwene gets to acting the better her chapters are.

Crossroads of Twilight does not suffer from Middle Book Syndrome. It suffers from Middle Chapter Syndrome. It answers any questions as to what was happening with the rest of the characters while Rand and Nynaeve are off cleansing the taint off saidin. It also sets up the next part of Egwene’s storyline, and the future of how the major protagonists will relate to the Seanchan. That’s about all that Crossroads of Twilight is.

It’s this that makes Crossroads of Twilight such a disappointing novel. There is very little that occurs in the text that needs to be told directly. Not that required 800 pages of paperback text. A couple of chapters could reasonably have covered it, maybe three hundred pages at most that could have been spread between The Path of Daggers, Winter’s Heart, and Knife of Dreams. That’s not what happened, of course, we were given Crossroads of Twilight. It’s a novel that isn’t a novel, it’s a long interlude in between novels. It is a collection of chapters in a larger novel. Taken from that perspective, Crossroads of Twilight is not an offensive novel. It’s really not much of anything at all.

On to Knife of Dreams, please.


Previous Reviews
The Eye of the World
The Great Hunt
The Dragon Reborn
The Shadow Rising
The Fires of Heaven
Lord of Chaos
A Crown of Swords
The Path of Daggers
Winter's Heart
Posted by Joe on Monday, October 05, 2009
Email ThisBlogThis!Share to TwitterShare to FacebookShare to Pinterest
Labels: Robert Jordan, The Wheel of Time