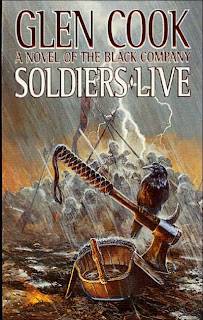 
Though there are two more Black Company novels rumored to be on the horizon, Soldiers Live is currently the final novel of the Black Company. Soldiers Live does not exactly bring everything full circle. The Company is about the intermingling of tradition and change, of past and present. Soldiers Live embodies this idea. When Glen Cook first published The Black Company he created a distinct cast of characters who comprised the core of the Company: Captain, Croaker, One Eye, Goblin, Elmo, Lieutenant, the Captain, Silent. Through these characters, and others, Glen Cook built the identity of the Company. The Black Company was a mercenary company, though. They were always at war in the employ of somebody, at least in the opening volumes of the series. In war, people die. Soldiers die. The original cast, which I am quite sure was beloved by many fans, was depleted. The Black Company was a mercenary company and when one soldier falls another soldier steps into his (or her) place. Over the years, over the eight previous novels (plus an offshoot novel), the overall cast of the Company has changed.

After being on the back burner for the previous four novels (for a variety of reasons the last four novels have been narrated by Lady, Murgen, and Sleepy), Croaker is back as the Annalist of the Black Company. Croaker was the original narrator of the series back when he was Annalist and medic. Glen Cook’s vision of the series, his storytelling, is strongest when Croaker narrates.

Soldiers Live picks up several years after the conclusion of Water Sleeps. The Company is building their strength in a world behind a Shadowgate, the world where the Nyueng Bao likely originated from. They intend (and do) return to their own world to finish their fight against Soulcatcher, Mogaba, the Daughter of Night (the long ago kidnapped of Croaker and Lady), and Narayan Singh (the one who kidnapped the kid), and to finally stop the Goddess Kina from returning and bringing about the world destroying Year of the Skulls. Soldiers Live is a novel of conclusions, of endings. For Croaker the story is personal. The most important aspect is that it is his daughter in question, the one he never had a chance to meet because of Narayan Singh. The other important part of the novel, for Croaker and for longtime fans, is that Soldiers Live gives the first glimpse of Khatovar. The Black Company is known as the last Free Company of Khatovar, though nobody knows what that means anymore given that it has been 500 years since the Black Company left Khatovar. Khatovar has long been an obsession of Croaker’s. What Glen Cook shows the readers is not at all what might be expected, and yet it is more poignant and powerful because of that surprise.

Glen Cook resolves all of the major plot threads that had been left dangling for several volumes, but he does so in a way that feels like this is the way the stories should tie together, that he isn’t just jamming everything in to satisfy the patient reader. After ten volumes Glen Cook cannot possibly make Soldiers Live feel completely fresh, but one thing that Cook has done a good job of (even when a couple of the books kind of sucked) was making sure that he does not simply tell the same story over and over. Croaker has changed over the years. Lady has changed. Soulcatcher has not (interestingly enough). The Black Company itself, under command of Sleepy, has drastically changed and by the end of Soldiers Live the readers sees that change will not cease. The Company at the end of the novel is not the Company we were first introduced to. This is perhaps Cook’s greatest accomplishment with The Chronicles of the Black Company, that he constantly shakes up the status quo and is not afraid to take chances.

While coming back to Croaker could be viewed as a chance to capture what made the series so great to begin with (Murgen’s two volumes really were a mess), it was an appropriate choice. It was a chance to bring the narration full circle and through the much older eyes of Croaker, show the changes that have taken place. Sleep or Suvrin would not able to show the contrast nearly as well as Croaker. Between Water Sleeps and Soldiers Live, Glen Cook has given The Black Company a fitting send off. He has Croaker repeat throughout the novel “Soldiers Live. And wonder why” as a bit of a mantra, of sorrow and question, and of acceptance that frequently the characters will never know the reason why things occurred. They just get on with their job.

That is Soldiers Live.

If there really will be two more novels of the Black Company I will welcome them. If not, Soldiers Live is a very good way to say goodbye. Nearly everything that needed to be addressed in the novel and the series was addressed, or at least touched on.

It was worth the journey.
Posted by Joe on Wednesday, January 21, 2009
Email ThisBlogThis!Share to TwitterShare to FacebookShare to Pinterest
Labels: Chronicles of the Black Company, glen cook, Soldiers Live, The Black Company

I do think that Bleak Seasons was the weakest of all the Black Company books. However, I also think the two Murgen-narrated novels serve a vital purpose in helping the readers gain a deeper perspective of the "star characters." Seeing them through a different set of eyes helps us to realize that not every narrator was completely candid at all times.

In particular, Lady may have fudged some things in Dreams of Steel. The example that comes to mind is her first meeting with Murgen after the siege of Dejagore has been lifted. She writes that she sent him away, but it is only when he writes of it in Bleak Seasons that we learn that Lady was back to her imperious ways and put a spell on him to force him to do something.

I really like She is the Darkness for three things that usually go unrecognized. 1)It is the account of a military campaign, as the Black Company and Taglian Army push south through the mountains and lay siege to a fortress. Sieges are boring affairs with flashes of action, and this is captured in the book. 2) during those in-betweens, we get to watch Murgen sink into addiction, as he prefers to spend his time drifting away from his body through Smoke's magic. So the book is a study of how one person can become an addict. 3)The book is, on a small scale, a love story between Murgen and Sahra, despite the many things separating them. This was quite touching IMHO.

Finally, I still recommend Elfquest, in case you didn't see my late comment to your January 17th post :-)

I don't disagree with what you're saying about the little bits that are good about those books (I liked Lady as narrator), and I certainly didn't pick up on all the details, but as novels to read - I really think the Murgen books are disappointing. Important info to convey or not. :)

I'll have to check out Elfquest.

Hi Joe, we'll have to agree to disagree again ;-)

I'm typing this at work, just as with my earlier comment, and I was so busy before that I forgot to mention a thanks to you, for writing the Soldiers Live in depth review. I appreciate your hard work in updating your blog on a regular basis! Cheers!


Comments with NO SPOILERS:

Shadows Linger:
4- (Half a book is about a person that is not a member of The BC.)

The White Rose:
4+ (The letters were annoying. The ending was very good.)

Silver Spike:
4+ (Some moments are described from a strange point of view.)

Shadow Games:
4 (The travel south was too easy and too quickly described.)

Dreams of Steel:
5- (The grittiness and military action resembled the first book.)

Bleak Seasons:
4 (Weak start but then the book was very gripping for me.)

She is the Darkness:
4+ (Too powerful “spying tool” and “bamboo poles”.)

Soldiers Live:
4+ (Some bad ideas about Voroshk. The ending – PERFECT!)

I pretty much couldn't put this series down, I found it not too long ago and just finished it. I found the Books of the North ridiculously good, especially given that the first was published two years before I was even born. The ending of Soldiers Live, like all great fantasy books I've read, left me feeling both enlightened and incredibly sad. I had wished for a happier ending for Lady and Croaker (make them gods in their own right, forever young and strong and eternally together!), given how much Croaker gave to the Company over all those years. Although the whole of the series generally saddened me since all the characters I knew and loved faded into the Annals over time. The writing was so powerful it made me want to comfort some of the characters, as if they were people I grew up with. I'm not sure why, but I generally found myself commiserating with Soulcatcher (I doubt she got much love herself as a young woman), and I really liked her. I felt she could have been something much different had she found someone like Lady found Croaker. I could rant for a long time about the sheer greatness of this series, but I'll sum it up by saying those who have not read it will be far, far lesser for it.