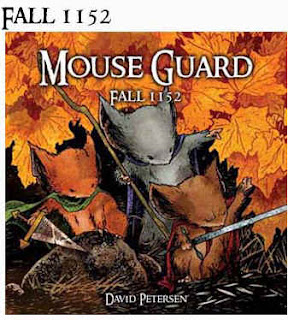 Okay, so I'm not quite sure how to talk about graphic novels, but I finished Mouse Guard: Fall 1152 the other day and I had to post something about it.

David Petersen takes the premise that there is the whole culture of mice society that exists hidden from the rest of the world. Protecting the mice as they travel paths between their cities and towns are the Mouse Guard - the elite of the mice.

The Guard patrol borders, find safeways and paths through dangerous territories and treacherous terrain, watch weather patterns, and keep the mouse territories free of predatory infestation. They do so with fearless dedication so that they might not just exist, but truly live.

Fall 1152 features three Guardsmice (Saxon, Kenzie, Lieam) who begin the novel searching for a missing mouse and end up as part of a larger problem facing the Guard.
Mouse Guard: Fall 1152 is filled with narrative tension, a great story, and quality art.

In short, David Petersen told a story I could completely get into and want more from.

Even better, there's going to be a Mouse Guard: Winter 1152 and then a book on Black Axe (Which will make sense after you've read Fall 1152)

And, because enough is never enough, what I really want to know is what happens in the 856 years between 1152 and today.

Cool, you ever read Redwall?

I haven't. One of my college roommates was big into the series and, well, that was enough to make me avoid the books.