World Fantasy Award Nominee: The Gospel and the Knife 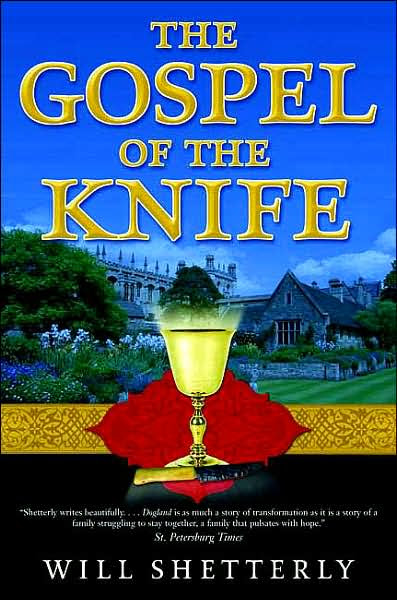 The Gospel and the Knife
Will Shetterly
Nominated for the 2008 World Fantasy Award: Novel

According to Will Shetterly, The Gospel and the Knife is not his best work and he suggests that new readers don't start with this one, because "Elsewhere and Dogland are better". Perhaps, but since The Gospel of the Knife is my first exposure to Shetterly's novel length fiction I'll just have to let the book stand on its own with no comparison to his earlier novels.

The Gospel of the Knife is two thirds of an interesting story, two thirds of a book that was almost excellent, that grasped for something it could not quite reach. This is, I understand, something of a follow-up to Dogland though it requires absolutely no knowledge of the events of Dogland.

Written in second person perspective, The Gospel of the Knife is a coming-of-age story of fourteen year old Christopher Nix at its center. Set in 1960's Florida the opening of the novel paints a picture of who Chris is, a sometimes angry young white man (like any 14 year old, to be honest), an artist, something of a counter-culture rebel with long hair in a crew-cut community, and a boy who doesn't yet know who and what he is. Chris rebels against his parents, runs away from home, meets up with a black girl a year younger than he, gets into some trouble and then the first shoe drops.

Ralph Fitzgerald shows up at the front door of the Nix family with an offer. Mr. Fitzgerald represents Mr. Jay Dumont, a man who fought in World War I and had his life saved by Christopher's grandfather and even though Grandpa is dead, still wishes to repay the debt. The method of repayment was to enroll Christopher in an elite school known only as The Academy. This is a school which produces future leaders and important men. It is a rare opportunity. Of course Christopher goes.

What follows is a weird combination of what feels like a version of Skull and Bones and kitchen-boy fantasy told in a prep-school setting. This may not be the most appealing description I could give, but it does cover the entire second section of the novel. Christopher, you see, is heir to a special power and through this school and Jay Dumont will help him master this power. Sort of. Simply having the power puts Christopher into an elite society that makes him an elite among the elite, except this is all so new to Chris. Remember, just days ago he spent his life as a normal kid. He adapts remarkably well. Perhaps too well for believability given that the world in which Chris lives is not at all supernatural (no matter what may have happened in Dogland, which I haven't read).

Christopher plays the traditional role in epic fantasy where he is the young man who grows up without knowing anything of his destiny or power but will soon learn to use it and do something beyond his years. This is the kitchen-boy fantasy aspect (see the Memory, Sorrow, Thorn series or The Belgariad for more "traditional" examples of this).

At times the perfectness of this new life grates a little. Sure, Chris hides what he is, and occasionally he pines for the C.C. (the young black girl from early in the book), but overall he is a little too smart and a little too quick to adapt. Things are too easy for him. What Will Shetterly excels at, though, is telling the story. If things are a bit too pat, Shetterly's skill at storytelling and easing the reader through the story makes up for the patness and his easy delivery hints at greater things to come in the novel, the possibility that the conclusion will blow my socks off. It's a hell of a set-up.

Then we get to page 219 and Book Three and The Gospel of the Knife runs off its rails and loses focus. Yes, this was clearly a deliberate decision to include a 69 page retelling of the Christ story in a style / manner which fits the story Shetterly is telling but that decision grinds the narrative to a screeching halt. These 69 pages (ending on page 288 of a 319 page novel) absolutely destroy any momentum Shetterly had built in the first 219 pages of the novel.

The conclusion itself feels a bit forced, but this may be because I was yanked out of the story two thirds of the way through. Getting back to the Chris / power stuff was difficult because not only did Shetterly mess with the narrative flow of The Gospel of the Knife, he telegraphed part of what he intended to do with the conclusion in Book Three. It isn't exactly deus ex machina, but it points in that general direction.

So, The Gospel of the Knife had some potential and Shetterly clearly tried to do something interesting in the end, but he was not as successful as perhaps he hoped to be. Shetterly is a good writer, this is obvious from how smoothly he puts together the story up through the rising action but just as he's about to hit the climax to the story it all slips away.

I have a good deal of fondness for The Gospel of the Knife and even writing about it I want to like it more than it perhaps fully deserves. The novel is enough to make me want to seek out Shetterly's earlier, "better" work to see how they compare. The Gospel of the Knife, however, falls short of being as good as it could be and perhaps short of being as good as it should have been.
Posted by Joe on Thursday, October 16, 2008
Email ThisBlogThis!Share to TwitterShare to FacebookShare to Pinterest
Labels: The Gospel and the Knife, Will Shetterly, World Fantasy Awards

Maybe I'm being too cynical, but I think that if the story hadn't tried to tie into Jesus, this book wouldn't have even been nominated for the WFA.

I completely disagree. That was one of the weakest elements of the novel and one which kind of came out of left field.

I don't mind Jesus in my SFF, but it was so out of place here and it just pulled me right out of the novel. Drop the Jesus subplot and you have a much stronger novel.

Not sure who the judges were, so I can't say what might have influenced them.

Shetterly spent too much time setting up the Christ connection in Book Two for Book Three to surprise me.

What I didn't expect was for him to spend so much of the remaining novel in Book Three. Book Four felt almost like an afterthought.

I didn't catch it all in book 2, though I could see part of where he was going, but Book 3 was just way too long. I didn't expect Book 3 to go on and on and on and on like it did.