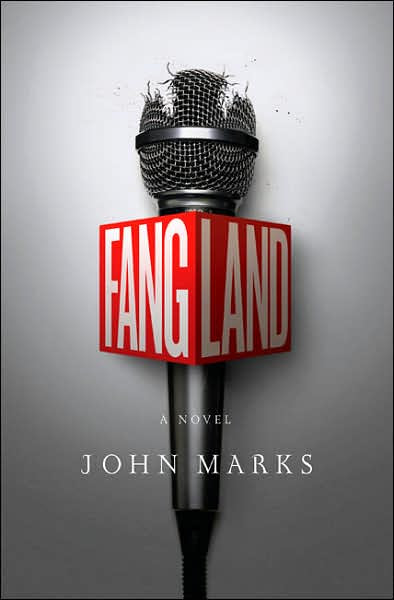 
The thought of a modern day telling of the Dracula story is not overly appealing. Dracula has been done already, and vampire stories have been written in a variety of styles over the years. John Marks revisits the Dracula story, but updates it to fit more into a modern setting and perhaps make the story a touch more realistic. Fangland follows the basis structure of Bram Stoker’s novel in that rather than Marks telling the story with letters and journal entries (like Dracula), Fangland is told through e-mail, diary entries (somethings never get old), first person accounts, and, in some cases, supposition. The novel opens with a note from a man named O’Malley, a television executive who is putting the Fangland tale together and he lists out the methods he uses and acknowledges that there are certain things he cannot know and others that he has a good idea as to what happened.

The clues as to what sort of story this is lies in a) the title, b) the jacket art – a microphone with two fang-like bites taken out, c) a blurb noting the Dracula comparison, and d) the lead character is named Evangeline Harker. One doesn’t put a lead character with the last name of Harker into a novel unless one plans to do something with it. We get what has to be presumed to be a descendant of Jonathan Harker (assuming the original Dracula story was true), or at least a healthy reason to be suspicious as to what is going on and what sort of story John Marks is telling. We else get echoes in the name Evangeline of Mina Harker, the fiancé and later wife of Jonathan and, from The League of Extraordinary Gentleman, a heroine in her own right. This is just cosmetic, of course, but Fangland is not the sort of novel that gets written by mistake or without being well thought out.

Torgu turns out to be far more than simply an Eastern European crime lord. He pretends at gentility but there is a sense of horror beneath the surface that does not need to push hard to show. Evangeline alternates between being charmed by Torgu and being afraid for her life. Unfortunately for Harker, but fortunately for the reader, the charm wins out long enough for Torgu to bring Harker back to his “hotel” and for the bad things to begin. The opening of the novel is Evangeline’s e-mails back to her fiancé, but after she “disappears” the story shifts to the horrors beginning back at the offices of The Hour. Through diary entries, first person accounts, and assumptions made by O’Malley (told in a more traditional third person perspective), the horror somehow travels from Romania to New York City, overlooking Ground Zero (yes, location matters).

Fangland is well written and Marks’s prose is smooth enough that readers will be pulled through the novel at a fairly rapid pace. On the surface of things, Fangland is a fairly solid novel. Nothing glaring jumps out as a negative. That Torgu is not a traditional vampire is not a knock, nor is it a spoiler since it does not go into specifics and it is obvious from the start that Torgu is stepping into the role normally played by Dracula. Marks plays a bit with the Dracula / vampire expectations in Torgu’s reactions to the legends of Transylvania as well as in how the novel itself unfolds. This is not the usual Dracula / Vampire story.

Under the surface, and despite the World Fantasy Award nomination, Fangland scarcely stands out from a crowd of vampire novels, let alone fantasy. It is a well written novel that despite everything that Marks does well (writing characters, coming up with a modern way to re-write Dracula, showing what the working environment is at 60 Minutes, ahem, The Hour) is simply nothing special. Several chapters / scenes work exceptionally well (Evangeline escaping with the missionary…actually anytime Evangeline is together with the missionary), but as a whole, after any chapter and especially after finishing the novel, my reaction was generally, “Huh. That’s it?” Despite having something of a climactic “final battle” and the presence of some genuinely horrific moments, Fangland never quite delivers a fully satisfying experience. Fangland is a novel of great competence and was well thought out and well written, but just being good is not good enough. For all the knocking I gave The Gospel of the Knife, at least Will Shetterly’s reach exceeded his grasp. Shetterly tried. John Marks appears to have grasped exactly what he reached for, which is a solid novel – a good novel, but nothing special or out of the ordinary. Nothing to make a reader sit up and take notice. A proficient novel.
Posted by Joe on Monday, October 27, 2008
Email ThisBlogThis!Share to TwitterShare to FacebookShare to Pinterest
Labels: Fangland, John Marks, World Fantasy Awards

The question is did you enjoy the book. Based on your comments is seemed you enjoyed reading it, but it's not exactly a ringing endorsement. It appears the only thing about the story you didn't like was that it got nominated for an award.
William R Kurfman
Lost In Antiquity
http://www.eloquentbooks.com/LostInAntiquity.html

I mostly liked it. Fangland is a competent novel, but it just isn't anything special.