This is more of an acknowledgment than anything else. I read One Eyed Jacks over the summer and since I plan to start stepping back into the Wild Cards series, I want to at least mention this volume of one of my favorite series. You can also consider this part of my occasional posts covering what I read while in Texas. Very occasional posts, at that. 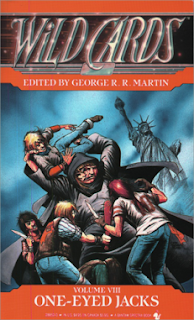 One Eyed Jacks is the eighth (out of 21, so far) novel in George R. R. Martin’s Wild Cards shared world milieu. Sadly, it is one of the least successful so far. While each book has something I don't care about (like the Ti Malice storyline of Down and Dirty), most are strengthened by some aspect that I adore. One Eyed Jacks is missing that bit of specialness.  Plus, One Eyed Jacks has more Tachyon and Blaise (not a good thing in my book). Also, jumpers. The jumpers are a group of aces who can “jump” their consciousness into the bodies of other people and completely take them over. Conceptually, it’s a fascinating idea because if you consider that they can also take over other aces and the accompanying powers, there’s a lot of damage these little bastards can do with minimal personal repercussions.

Thing is, there are repercussions because when the jumpers pick on the wrong aces or the wrong people, somebody is going to come looking for answers. In this case, Blaise. Yes, that damned Blaise – the sociopathic son of Dr. Tachyon and who perpetually has storylines I find intensely uninteresting. I’m sure others take nasty delight in the appearance of any Blaise storyline. Wild Cards has plenty to offer. While I enjoyed how aspects of the Jumper / Blaise story resolved, it’s just more Blaise with the suggestion that he will continue to take a prominent role in the coming volumes.

Other storylines in the novel feature Jerry Strauss, once The Projectionist who was trapped in the body of a giant ape, now Mr. Nobody, working as something of a private investigator in love with his brother’s wife; Dr. Tachyon’s new chief surgeon Dr. Cody Havero; and The Oddity. Stephen Leigh’s Oddity story “Sixteen Candles” is a poignant and painful story. It’s also damn good.

While I want to see how the jumper concept works itself out, One Eyed Jacks did not have me clamoring to pick up Jokertown Shuffle to get the next installment of the story.

Despite this, Wild Cards remains an impressive achievement of shared world collaboration. George R. R. Martin has done well to keep it going over the years, even if there is the occasional dip in quality. If you’re looking for a starting point for the series and shudder at the thought at starting with the first book and slogging through twenty more volumes, start with Inside Straight. It may be the eighteenth volume, but it serves as a reintroduction to the world with a new cast of characters and new story arcs. I highly recommend it (and the whole series).