Blood in the Fruit, by L. Timmel Duchamp 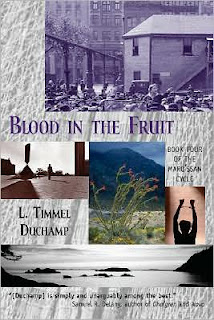 Blood in the Fruit is a novel which deserves a more meticulous review than I am able to give at this time, but I also do not want the book to go unremarked on. So here we are.

Blood in the Fruit is the fourth volume on the Marq’ssan Cycle written by L. Timmel Duchamp. The first three are Alanya to Alanya, Renegade, and Tsunami. The Marq’ssan Cycle, as a whole, is a series of social and moral ideas played out in bold and clear strokes with characters actively conscious of motivation, identity, and theory. The ideas here are what is important.

As I mentioned in my review of Tsunami


This is a highly political novel filled with depth of thought. Duchamp uses dialogue and the inner narration of the characters to explain political and power philosophy. Duchamp may be a bit blunt and obvious in the handling of this political discourse, but by this point it is part and parcel of the story Duchamp is telling. She is telling a political and feminist story, and if that was going to be a problem it would have been a problem in Alanya to Alanya.

With a lesser writer this would be a flaw. With Duchamp it is simple intent and purpose, though nothing is truly “simple” with L.Timmel Duchamp’s writing.

Set some ten years after the events of Alanya to Alanya, Blood in the Fruit focuses on Hazel Bell (assistant to Elizabeth Weatherall, a major player in this series), Celia Espin and Alexandra Sedgewick (daughter to Robert Sedgewick, the primary antagonist of Alanya to Alanya, though that term does not quite convey his role in the series).

With Elizabeth Weatherall’s defection in the previous book, the ruling Executive of the United States is in shambles and fighting to come to grips with its growing ineffectiveness in doing anything to stop the “alien agenda” or protect its grasp of power, and to combat this, the formerly retired (and broken) Robert Sedgewick is stepping back into a position of clear authority. Through the eyes of his sixteen year old daughter, Alexandra, the extent of his character is laid clear. Sedgewick is grooming Alexandra, much to her dismay, to assume a greater degree of authority and power in the Executive.

While the other characters experience their own personal traumas (none moreso than Celia), Alexandra’s story is a painful bit of “coming-of-age”, shaped as it is by Robert Sedgewick.

Alexandra’s story is on the verge of being the simplest and the easiest part of the narrative, but though Duchamp tells her story in a straightforward manner, Alexandra’s “coming-of-age” is deeply problematic from a moral perspective, as grotesque in its way as anything in the previous novels – the torture of Kay Zeldin included (though, perhaps not to that extent).

By no means should one attempt to read Blood in the Fruit without having read the previous three volumes. This is almost a standalone volume, in the sense that the events of the novel can be understood without prior history with the Marq’ssan Cycle, but it is a richer story with deeper meaning if the reader has taken the full journey thus far.

Duchamp builds socio-political change in this series and does so in very stark terms. While not to every reader’s taste, Blood in the Fruit is an excellent and powerful novel. Very well done.

It is in this book that Hazel Bell and Elizabeth Weatherall's relationship ends. Hazel has one of the main POV's and her story was the most compelling to me in this volume. I couldn't appreciate Alexandra's as well because I'd already read Stretto at that point (yes, I read the series out of order, and I insist it is just as valid that way). Alexandra's story is fairly linear (given that we meet her as a child) and it suffers by being read out of order. In Stretto, she is one twisted character. (On the other hand, Kay-Sedgwick-Elizabeth triangle just goes through iterations. Read Alanya to Alanya after Renegade actually gave me closure to that killer of an ending the way Tsunami didn't.) But other than that, it works well.

As to why I read them out of order? I think I just opened the first page and couldn't put it down. For all their political heaviness and not-for-the-squeamish attributes, these are the most compulsively readable books I've come across. And profound. Briliant, complex, and layered. I don't know if any review could do them justice. Maybe if L. Timmel Duchamp wrote one (I read a few of her reviews)... It is my personal mission in life to get more people to read them.

That's an interesting way to read them. Not sure I'd recommend that, but whatever works and I think that just reading them is important.

And I don't think I've done them justice either, but I'm always glad to see that people have read them.