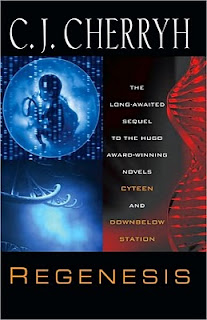 That is the question readers are told to expect the answer to, and depending on how long ago one last read Cyteen, it is an answer many readers have been waiting to learn for up to twenty years. The murder of Ariane Emory was a central and pivotal event in Cyteen and the identity of the killer was the main lingering question from that novel.

Jo Walton had a post on Tor.com about the murder, in preparation for reading Regenesis for the first time. Then, she read the book and was wholly unsatisfied with the answer to the question and somewhat with the book itself.

While “Who killed Ariane Emory” is presented as being the central question of Regenesis, I am not entirely sure that the answer matters. Oh, it matters from a sociological perspective because the “why” is more important than the “who” because the murderer was never apprehended or identified and is, possibly, still alive and at large twenty years later when Ariane Emory II, the clone of Ariane Emory Senior, is maturing and coming into her own power – power that will eventually be the Directorship of Reseune itself. Ari II is constantly at risk, both personally and politically and the “why” of Ariane Senior’s murder may be vital to her Ari II’s survival.

The core of Regenesis, however, is not specifically about uncovering the answer to that question. The core of Regenesis is a brief period in the life of Ariane Emory II and her associates as she comes into public power and authority and attempts to navigate an extraordinarily complicated and perilous political situation on Cyteen.

Regenesis is a novel of conversation about power, about genetics, about family, and about ambition (among other things). The most thrilling passages were long conversations between two characters (often Ari and Yanni) that could come across as massive info dumps but still manage to convey tense political drama and danger. Because Cherryh frequently presents the third person limited perspective of Ari, the reader knows that a wrong answer could lead Ari down a path where she needs to eliminate (in some manner) the other person. Tense.

This is not an action laden novel and there are only a few scenes that could be construed as “action” or even just physically tense. So much of Regenesis is built into the psychology of the people in Ari II’s personal orbit and this is where the drama lies. Will the younger Ariane live long enough to assume the power of Ariane Senior? Will she be able to continue to find her own path or will circumstances turn her as cold as Ariane I could be? Will history repeat itself?

The cloning of Ariane and a couple of other individuals suggest that, at the very least, the people in charge of Reseune believe in the Great Man Theory and that these individuals are inherently important to society and that without them, their world will falter.

This is an interesting theory and a way to consider the actions of Reseune. Are they right?

Regenesis is a worthy sequel to Cyteen and while it does answer the question of who killed Ariane Emory, the reason to read this novel is to follow Ari as she begins to assume power in Reseune in her own right. One more thing that is interesting here is that there are passages where Ari II is recording messages for the someday to come Ariane III on the assumption that the cloning program will continue and that, perhaps, the next clone will be based on Ari II and not off Ari I (part of the process is nurturing the replicant with as identical an upbringing to the original as possible).

One can only hope that there will be a third novel in this sequence and that it will focus on a more mature Ariane II (and not jump ahead to Ari III, Cherryh has done Ariane’s coming of age already now). Surely there is a novel in seeing how she changes and how she exercises her power. If it is safe to hope for a third novel, we can only hope that it will not take another twenty years.