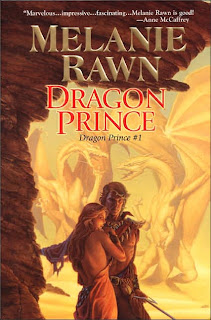 I have love in my heart for a good number of fantasy novels and series I read in my youth. They were the gateway drugs into a lifetime of reading epic fantasy and into other branches of science fiction and fantasy. Among those novels so important to my teenage years, Melanie Rawn’s Dragon Prince holds a special place of distinction. It has been more than ten years since I last cracked the cover of one of Melanie Rawn’s novels and visited my old friends Rohan and Sioned, since I read Skybowl, the conclusion to the second trilogy and the last time Rawn has given readers entry into this deeply drawn world.

Would the novel hold up to the esteem time and memory have given it? Would I still be so inclined to read the other five novels set in this world?

The short answer is yes.

Oh, and the cover art? That cover is the reason I pay attention to cover art and who the artist is. Michael Whelan’s cover is striking and it made the younger me take notice of his work. I also remember Whelan’s work with Meat Loaf’s Bat Out of Hell II album. They are inextricably linked in my memory.

One thing to note: there is an excellent chance of spoilers in the below conversation. This is my re-read and not whatever I might consider to be a “proper” review. If you are looking to avoid being spoiled for certain events of the novel AND the series (though I’ll try to limit series spoilers), please just know that I think Dragon Price is a fantastic novel and that it remains one of my favorites of the genre, and that you should probably go read it now.


Melanie Rawn is not a writer afraid to do terrible things to her characters; her heroes in particular. Let’s just get this out of the way from the start: bad things happen to the characters we care about, and sometimes they do bad things themselves. Dragon Prince opens with concepts of black and white and gradually shades greyer and greyer as the novel progresses. It isn’t so much that the concepts of “Right” and “Wrong” are in question, but that the question of whether it is sometimes necessary to do what is wrong to accomplish a greater good arises. This is made stark late in the novel when, despite all of his dreams and visions for a better future, Rohan is confronted with his capacity for barbarism while still holding to a dream of a more civilized world.

Much of Dragon Prince is a political dance as, through the first half of the novel, Rohan plays the simpleton to gain concessions from the High Prince Roelstra and cleverly builds advantage for the Desert.

Roelstra, it must be said, is one of the great villains of fantasy literature. His primary concern is power, whether it is exercising it over vassals, coercing others, or acquiring more by devious means, Roelstra is about power and he is not a benevolent ruler. This puts Roelstra in stark contrast with Rohan. Rohan wishes to build peace by law and ultimately change the political power structure of the land, but every step Rohan needs to make he knows that Roelstra will oppose.

This conflict is one of the two primary conflicts of the novel. The second is Rohan’s internal conflict of his desire to be a good man and his growing realization of what he will do to make his world a better place.

One of the more impressive aspects of the novel, besides the parts in between the front and back covers, is the magic system Melanie Rawn developed here. Now, I am not normally one to talk about magic and how it works and how it plays into the novel, but this is fairly inventive. It isn’t called “magic”, but the people with special talents are called Sunrunners. They are able to weave part of their consciousness on the sunlight, communicate over long distances, and use the light of the sun in a variety of other ways. The faradhi are specially trained emissaries to each Princedom and work and serve all over the continent. They report back to Lady Andrade at the Goddess Keep, and with a network of faradhi who can communicate by sunlight, Andrade attempts to manipulate Princes and protect her people and her family.

Dragon Prince is a very strong, powerful, and thrilling debut novel from Melanie Rawn. There is battle, but the beauty of Dragon Prince is in the political scheming at the Rialla and in the goals of Prince Rohan. Power and how it is used is a central concept to Dragon Prince and Melanie Rawn explores it well. This should be considered a must read novel for all fans of fantasy.


One final thing to note is that the trade paper edition of Dragon Prince seems to have done away with the genealogies and extra information I remember fondly from the mass market edition of my youth. I mourn the loss.
Posted by Joe on Thursday, May 13, 2010
Email ThisBlogThis!Share to TwitterShare to FacebookShare to Pinterest
Labels: Melanie Rawn

This review brought back great memories. I just picked up the first in the Dragon Star trilogy and it's calling my name.

Great to read your review. I just looked at my old mass market paperbacks and all have the map; the second and third have family trees and character index; and the third has a few pages on the genetics of of sunrunners and sorcerers (a la Katherine Kurtz's Deryni books). The first two are huge books (they didn't use extra-thin paper), while the third--only 100 pages less, but the paper fees similar--is a much smaller book.

Anyway--I'm thinking of rereading them now. I know I never finished the series, but I found my bookmark at the end of chapter 1 in book 3, Sunrunner's Fire, which is further than I thought I'd gotten. ;-) No idea why I didn't keep going--probably moved or got sidetracked or something.

Whoops I mean the paper in book 3 "feels" (not "fees") similar (in thickness).

I was also recently intending to reread this book since it's been years since I last read it. But somehow my copy had disappeared after I dug it out of a box and put it on the kitchen table, and I have been searching for it every since *sigh*

Kendall: So maybe Dragon Prince never had the genetics and genealogies? I assumed they all did.

I haven't read these books but have always loved the covers. If memory serves, they were my first introduction to Whelan's work and I've been a fan ever since.