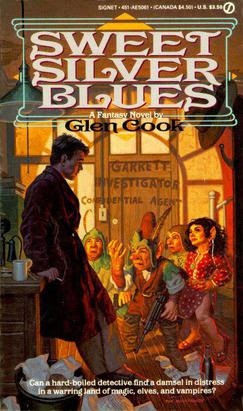 Finally, I have conclusive proof that I might actually be a fan of Glen Cook and not just of his Black Company novels. I’ve tried a standalone novel (Sung in Blood), I’ve read the first Dread Empire Omnibus (A Cruel Wind) neither were at all impressive. A Cruel Wind at least had glimpses of the goodness to be later found in The Black Company, but Sung in Blood was rough.

A couple of months ago my wife had an eye exam and I had some time to kill at Barnes and Nobles. I grabbed a copy of Sweet Silver Blues and before I knew it was 40 or so pages in and was completely caught up in the story.

Sweet Silver Blues is the first of twelve Garret P.I. books. Garret is a grizzled former soldier turned investigator, world-weary but intent on doing his job for pay, almost no matter what the job. Here he is contracted to track down the woman his former friend left a fortune to. A fortune that until the will was read, nobody in the family knew existed and nobody in the family was bequeathed. They contracted Garret to journey to the Cantard, a dangerous almost lawless region on the border of military conflict.

I don’t know much about the tradition of detective novels set in a high-fantasy world, but The Garret P.I. novels fit the bill, give the fantasy reader a bit of a different flavor to chew on, and Glen Cook is near the top of his game here. Cook spun a great tale and Sweet Silver Blues stands up next to the Black Company and holds its own. That’s impressive. The novel may be 20 + years old, but it stands the test of time.
Posted by Joe on Thursday, July 24, 2008
Email ThisBlogThis!Share to TwitterShare to FacebookShare to Pinterest
Labels: Garrett PI, glen cook, Sweet Silver Blues

Read „The Tower of Fear” (fantasy) and “The Dragon Never Sleeps” (science-fiction). These are Glen Cook’s standalone novels, which are arguable his best books. These books are a little complex, but you won’t be disappointed.
And remember to read some David Gemmell books. Start with “The Legend” – his first book. I’m currently reading “The King Beyond the Gate” and it is even better.

I'll probably get to those Glen Cook novels. Just not soon. I need to read the last Black Company novel, I have a second Dread Empire omnibus to review (*shudder*), and I'd like to hit up more Garret PI novels, too.

I got the latest of these from the publisher recently and I don't know what to do with it. Having to go back and read the 11 prior to that one is a lot. Maybe someday...