I first discovered the Deryni series in 1993 following the publication of King Javan's Year. I would have been fourteen that summer and in my quest to find and read as much science fiction and fantasy, preferably fantasy, from my small town library I picked up King Javan's Year. It was brutal. It was wonderful. I didn't know what this was, but I wanted more. 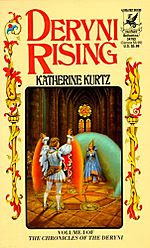 My librarian offered me three books from her person collection to read and eventually to buy: Camber of Culdi, Saint Camber, and Camber the Heretic. While King Javan's Year was my starting point, it was the Camber trilogy that hooked me and hooked me hard.  I would read and re-read most of those novels multiple times until I graduated high school, but only seldom dipping into Kurtz's original Deryni novels beginning with Deryni Rising.

It wasn't that I didn't like the Kelson trilogy, it was that there was such a separation in the chronology from the Camber era novels and the characters I really cared about were several hundred years in Kelson's past. Many of the details that I cared about, the mysteries and the magic and the rituals, were lost by Kelson's time. So I returned once again to Camber and ignored Kelson.

But time passes and a handful of people in 2015 get into a conversation on twitter and one person mentions Katherine Kurtz, another yells out "Deryni!" and without quite realizing how, at least five people are doing a re-read of a forty five year old fantasy novel.  I should note that it is a forty five year old fantasy novel that far more people should be talking about and recommending and putting on lists.

One thing that struck me re-reading Deryni Rising is just how short of a time period the novel takes place in. While technically it is over two weeks, much of that is between the prologue and the opening chapter. Once Alaric Morgan arrives in Rhemuth, the time frame of Deryni Rising is a matter of days.  So much happens in such a short period of time and a LOT of information is conveyed.

I have to wonder what my impressions of Deryni Rising would have been if I had read this book first (as it was the first published), rather than after reading at least five earlier novels in the chronology.  Would those hints of Camber and the Deryni persecutions rang as clearly if I didn't spend much of my teenage years nose deep in the events of that era?  Probably not, but you can only read a book for the first time once.

This time I have had a much longer break since the last time I had read those Camber era novels and I have only read the more recent Childe Morgan trilogy one time as it was published over the last decade (the Childe Morgan trilogy serves as a bit of prologue to Deryni Rising as it focuses on a young Alaric Morgan rather than the grown man we first meet in Deryni Rising). That break served to put my focus almost solely on Kelson and the story being told here and not so much on the Camber era.

Since it has been so long since I've read Deryni Rising, I was impressed by just how good it was and how well it held up as a forty five year old novel. Because of changing tastes, writing styles, pacing, and having read thousands of books in the intervening years, it is not uncommon for an older book to not quite hold up as well as I might have hoped. Deryni Rising remains an excellent and important piece of fantasy fiction.

Deryni Rising is the story of a prince having to take the throne far younger than he would like, barely into his legal majority, and having to fight the racial prejudice against his closest friend / adviser and battle a foreign challenger to his throne. On its surface, Deryni Rising is not all that remarkable. Plenty of novels deal with the topics Deryni Rising does. Except, they didn't. Not forty five years ago when Deryni Rising was first published. How Katherine Kurtz handled the historical political dramas in a fantasy world was groundbreaking and remarkable and set the stage for many novels to come. Katherine Kurtz deserves to be recognized for the master of fantasy fiction that she is, and her novels should continue to be read for many years to come.

I was recently moved to re-read this book after reading Kari Sperring's essay in Strange Horizons. I was also a fan of this series, but it has probably been 25 or 30 years since I've read any of the books. I enjoyed coming back to this book, but I was struck by how very short it was.

Kurtz wastes no time getting to her story and moving it right along. It's amazing just how short it is, but perhaps works all the better for it.

This is one of my faves - and I started with the Camber books. ;-) Anyway, overall, yeah! Way underrated author, and IMHO her books hold up great over time (I listened to most of the audiobooks over the past year or two).

Re. the length - I never really thought about it, but it's kinda surprising how much action AND rich description she packs in. None of these 800-page doorstoppers...she knew how to put a lot into a reasonable-length book. Granted, some of the other ones are longer - but they pack in a proportional amount of stuff. I (blush) haven't read the Childe Morgan books, but the rest, except maybe King Kelson's Bride, never feel like they had any fluff or padding (and KKB didn't seem long to me - just had some slower parts than most of her books IMHO...though on a 'reread' i.e., listen to the audiobook, more happened than I remembered).

I've enjoyed the two Kelson novels I've re-read a bit more than I expected to. I'm a big fan of Kurtz's Deryni novels, but I'm just looking forward to getting back to the Camber books.

Good to hear! I really would love audiobooks of the Camber books. I have more time for audio these days, although my backlog for audio is starting to get impressive. ;-)