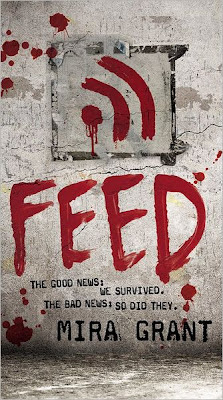 
Mira Grant’s Feed takes the zombie apocalypse story in a somewhat different direction. The zombies operate in a fairly standard manner. Zombification is caused by a virus outbreak and is otherwise known as “viral amplification”. Grant talks around science just enough that she creates a reasonably believable world – both in how the original outbreak occurred as well as the ways in which humanity and civilization have survived. The world of the Newsflesh Trilogy does not simply have pockets of survivors, it has cities and towns which have fashioned a way to survive. Government has survived in a recognizable manner, as has the Centers for Disease Control. This is a recognizable world to our own, only with zombies.

The different direction Mira Grant takes the reader is in the presentation. The protagonists of the novel are bloggers. No, really. Traditional news media still exists and still has a prominent role in the world, but an organized and licensed blogging culture came out following the outbreak and several decades later, that’s where a significant function of news is provided from.


Feed is narrated by Georgia Mason as she and her immediate team are the first bloggers invited to follow a Presidential campaign, that of Senator Ryman from Wisconsin, the first candidate to have been born in the years after the outbreak.

Besides my endless fascination with post apocalyptic worlds and how civilization breaks down, where Feed works is in the narrative voice of Georgia. Georgia is a “newsie”, which means that her role as a blogger is to report fact unvarnished by the slant of personal opinion. She is the driving force of Feed, which besides the coverage of Senator Ryman’s campaign, also involves the uncovering of conspiracy. Not that of the original outbreak, that’s fairly well defined in the novel and by the overall knowledge base of the world. But, if Presidential politics is a world of shadows and where power brokers work to manipulate events in a particular direction, of course there is something to uncover. As a newsie, as a journalist, of course Georgia will pursue it.

While a couple of events in the novel come across as weirdly convenient, Grant does not spare her characters or the reader. This is a zombie novel and though civilization has not been completely overrun by zombies, the world isn’t safe. Neither are the characters. Any of them.

The greatest success of Feed is that it is such an engaging novel. Readers will likely care about Georgia, Shaun (her brother), and Buffy (the third of the team) and most importantly, readers will want to know more, to keep turning the pages to see what happens next and how the story develops. It is a novel to be devoured in large chunks (pun semi-intended). As the first in a stated trilogy, I can’t wait to see where Mira Grant takes us with the next two novels – especially given how she ended Feed – which is something I would like to talk more about, but don’t want to be too spoilerific. Perhaps in a second post
Posted by Joe on Tuesday, April 17, 2012
Email ThisBlogThis!Share to TwitterShare to FacebookShare to Pinterest
Labels: Mira Grant