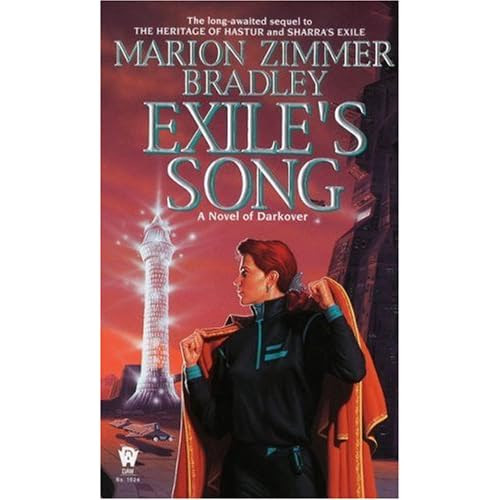 
With Exile’s Song Marion Zimmer Bradley returns to Darkover with a sequel to Sharra’s Exile, though set a number of years later. Margaret Alton is the daughter of Lew Alton, the Imperial Senator from Darkover. In Sharra’s Exile we had Lew’s story, but in the intervening years Lew told his daughter nothing about her heritage and Margaret is nearly estranged from her distant father. Instead Margaret is a musicologist, a scholar studying indigenous music on various planets. Along with her teacher, Ivor, Margaret is sent to Darkover and she is initially intrigued by this cold world. She experienced odd flashes of memory which she did not understand and soon after arriving Ivor died, leaving Margaret alone on a strange world which seems to be trying to reclaim her.

Margaret soon meets a cousin and hires a Renunciate to travel to collect the folk songs of Darkover, but between her visions and the hardships of travel, Margaret soon finds herself being pulled different ways as her large extended family attempt to lay claim to Margaret’s heritage. You see, Margaret is heir to the Alton Domain and as an unmarried woman and an untrained telepath, her emergence on Darkover is the catalyst for the troubles of others.

Exile’s Song slowly reveals Margaret’s heritage and her family’s history, as well as the history of Darkover, and throws Margaret into Darkovan politics.

The major issue is with this novel is that Exile’s Song features a half-hearted romance, and despite being the protagonist of the novel, Margaret Alton doesn’t do anything. She does not act. She barely responds to action, except with a refusal to marry or bend to local custom, until resolution occurs at the end of the novel. It seems that Margaret is simply swept along in a world she doesn’t understand and moves from point A to point B with no real intent at all.

Exile’s Song is a typical Darkover novel. It can be read without much understanding of Darkover, and I believe this is intentional. Most Darkover novels are written to stand alone, but that simple fact of standing alone leaves us with clumsy info dumps of detail that the long time Darkover reader will have been well aware of. Had the background been introduced subtly and in drips and drabs to give the story flavor, it might have been more effective, but as it stands, Bradley just throws it all at the reader in big chunks of exposition (throughout the novel). As always, Darkover novels are about the culture clash of Terrans with Darkovans, and any protagonist Bradley presents us with will naturally whether the culture clash easily. The villains are typically Darkovans who want everything to stay traditional with the “old ways” and / or Terrans who want to ruthlessly change everything. The middle ground is where the heroes lie, to protect Darkover while understanding that things can’t go back the way they were and that there needs to be a way to meet the Terran Empire but retain the Darkovan identity.

This novel reads quick and easy enough for a 400+ page novel that should be half the size, but it just is not very good. So little of note occurs in the novel and Margaret is such a weak protagonist that whatever story there is in Exile’s Song feels like a poor reflection of things that have been done before in stronger Darkover novels.
Posted by Joe on Thursday, November 29, 2007
Email ThisBlogThis!Share to TwitterShare to FacebookShare to Pinterest
Labels: Darkover, Exile's Song, Marion Zimmer Bradley