The Lies of Locke Lamora, by Scott Lynch

Unlike many novels, fantasy in particular, we are being asked to root for a criminal. Locke Lamora is a thief in the city of Camorr. He is a young, clever, talented, and extremely audacious thief. In short, if you or I wished to be a thief, we would dream of being Locke Lamora. Most fantasy novels which feature thieves will tend to feature a wisecracking sidekick of a thief. I'm looking at you, Jimmy the Hand, entertaining as you were. Or, you, Silk. You know who you are. 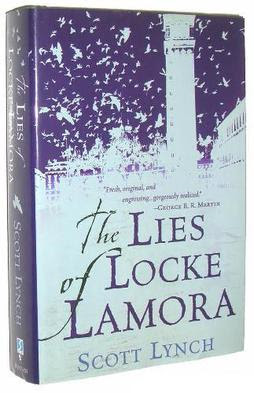 This brings an entirely fresh perspective to the storytelling. Scott Lynch bucks another fantasy convention and to great results. More often than not an epic multi-volume fantasy will begin with several hundred pages of introduction to the protagonist as a boy and before the big adventure begins. Scott Lynch does not do this with The Lies of Locke Lamora. Lynch gives us a bit of an alternating pattern. We do get the childhood forming of a thief which we would expect where Locke is being trained by a thief / priest named Chains. But, in semi-alternating sections we are given Locke as a young man running a con on one of the rich nobles of Camorr, Don Salvara. Through this con we see Locke and his group of Gentleman Bastards and how Locke has grown into an amazing thief leading something of a double life. We also get hints of something bigger going down in Camorr with mentions of a Gray King. This is important.

The Lies of Locke Lamora is a wickedly entertaining novel, let alone a debut. This is a fast paced, action packed, clever, funny, dangerous, sad, beautiful piece of fiction and a novel which I did not want to put down. Not for sleep, not for food, not to go to work to pay the bills, not to bathe. Reluctantly I put the book down for each, but when I wasn't reading The Lies of Locke Lamora, I was thinking about The Lies of Locke Lamora. This is outstanding fantasy in the greatest sense of the term. It is the work of a wicked imagination and one thing that Scott Lynch has apparently figured out which other authors have not is how to end a novel. As great as everything was throughout the novel, Lynch has a nearly flawless ending to the novel.

I would normally groan a bit at the thought of another seven volume fantasy series, but Lynch wrote such a strong opening that I am relieved he is writing more novels about Locke Lamora. Red Seas Under Red Skies is officially my most anticipated novel of 2007, and yes, this includes A Dance With Dragons even should George Martin finish the novel in time to publish this year, which thus far he has not. That is how excited I am about The Lies of Locke Lamora and the future work of Scott Lynch.

Any questions?
Posted by Joe on Wednesday, July 04, 2007
Email ThisBlogThis!Share to TwitterShare to FacebookShare to Pinterest

Reading Red Seas Under Red Skies right now. Fifty pages in it's looking as good as the first one. Wicked sense of humor is still intact.

Glad you liked the first one.

But, wait, you saying Lynch usurped Martin for you?

Only in terms of excitement for the next book. Martin, as a fantasist, is still at the top of the class, but I'm excited about Lynch right now...whereas Martin takes years in between volumes.