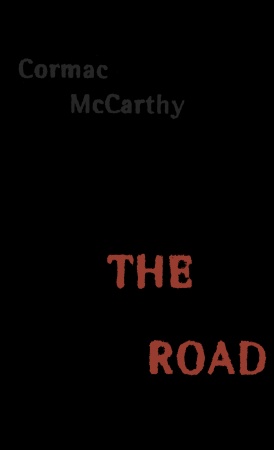 With the forthcoming release of the John Joseph Adams anthology of Post Apocalyptic stories Wastelands, this is a good time to list and discBlogger: Adventures in Reading - Create Postuss some P.A. novels and stories. I did some quick research last night to find a list of Post Apocalyptic novels and I was surprised to see that I really haven't read that many Post Apocalyptics. It just feels that way because the sub-genre is just so familiar feeling. It is a great sub-genre of science fiction. The world has been laid to waste by a variety of possible problems: vampires, disease, aliens, war, ecological disaster, whatever. It doesn't matter what the cause is, what matters is that our planet, or just our country has been decimated.

Unsurprisingly the novel that first comes to mind when thinking about this genre is The Road. Of course. It just won the Pulitzer Prize for Fiction and Cormac McCarthy brings his literary tradition to Science Fiction, possibly without realizing that he did so. It's a very spare novel, as one would expect from McCarthy. Excellent and well written it isn't one to really excite me despite the excellence. The second one that came to my mind is I Am Legend. Yeah, it is the "vampire" story, and also a "last man on Earth" story, but the Last

Man stories are all post apocalyptics because why else is there only one man remaining? This is a tight, tight novel with the last man heading into the ruins of L.A. by day and trying to survive by night.

The third story that came to mind was Octavia Butler's Parable of the Sower. Some disease has crazed the citizens of this country and there are outposts of humanity trying to hold on. This is an outstanding novel, as is much of Butler's work. Clay's Ark also gets a mention, though not nearly as good as this one (still a solid novel, but Parable is something else entirely). Set as part of the Patternist sequence Clay's Ark sets up the fall of man and there are some excellent sections later in the novel when the world is falling to ruin.

After that we have Neville Shute's classic On the Beach, a novel after the nuclear war. It's a true Cold War novel and shows the fall out of a nuclear war.

Some Post Apocalyptic Novels:
I Am Legend, by Richard Matheson
The Road, by Cormac McCarthy
Parable of the Sower, by Octavia Butler
On the Beach, by Neville Shute
Clay's Ark, by Octavia Butler
Cell, by Stephen King
Oryx and Crake, by Margaret Atwood
Doomsday Book, by Connie Willis
The Stand, by Stephen King
A Canticle for Liebowitz, by Walter M. Miller
The Postman, by David Brin
Several novels by Philip K. Dick.
Left Behind, by Jerry Jenkins and Tim LaHaye
Planet of the Apes, by Pierre Boulle
Armageddon's Children, by Terry Brooks
Battle Circle, by Piers Anthony
The Giver, by Lois Lowry


Then, there are a couple of series which clearly came out of a Post Apocalyptic setting but have gone so far after the fallout that the world has melded into something else: The Sword of Shannara, by Terry Brooks and The Book of the New Sun, by Gene Wolfe (beginning with Shadow of the Torturer). Others, like Crystal Rain by Tobias Buckell touch upon it, but go in a different direction and a diaspora to other planets prevents the work from truly being Post Apocalyptic even though we know that Earth is but a shell. I got a sense of the P.A. from Dan Simmon's Ilium, at least the part that was on Earth. Octavia Butler's Xenogenesis novels follow an human caused apocalypse, but after the aliens reseed the world with humanity the world appears to be in a more pristine state...so there is none of the wreckage that is associated with the genre.

There are a goodly number of Post Apocalyptic Novels out there, most of the above list I have read, but a few I haven't. There is a discussion going on at FBS which is listing far more than I've heard of or listed here.

If we get into short stories, then we have a whole 'nother listing, some of which are on the Wikipedia list, others haven't been quite collected. Octavia Butler's Speech Sounds is a great one (it will also be included in Wastelands). Asimov has Nightfall, and Ellison has a few (A Boy and his Dog, etc). More recently Chris Roberson's story "Last" from Subterranean #4 gets to the Last Man on Earth with disease ravaging the planet, killing most everything on the planet.

This is a great genre, though I suppose some can see it as depressing. I see it as hopeful, just in a very twisted way. For there to even be a story set there means that there is something or someone surviving and if there is a survivor, there is hope. Of course, that can be twisted around quite easily, but there you go. Hope.

The reason, I think, that I believed I had read more Post Apocalyptics is that dystopian fiction (1984, Brave New World, The Running Man, The Handmaid's Tale) feels like it followed some apocalypse, something that turned our world from something beautiful (though flawed), to something horribly broken. But, because there is still a semblance of a functioning society, it isn’t really Post Apocalyptic. It's just damn close.

So, what else should be added to the list?
Posted by Joe on Thursday, August 30, 2007
Email ThisBlogThis!Share to TwitterShare to FacebookShare to Pinterest
Labels: Cormac McCarthy, octavia butler, Post Apocalyptic Literature, Richard Matheson

I'm almost finished with Parable of the Sower, which I prefer over McCarthy's The Road. I also thought the McCarthy was well-written, but it just didn't resonate with me.
Maybe it's because I read Blood Meridian and No Country for Old Men (both of which did resonate with me) before I read The Road. (I plan to read it again in a few months to see if my reaction changes.)

Although Butler takes a different approach than McCarthy (and thus, comparing the two is probably unfair), her depth of character and underlining philosophical/theological themes are much more interesting to me than anything McCarthy explored. Again, it's probably unfair to compare apples and oranges, but I believe Parable of the Sower is going to stick around in my mind a lot longer than The Road

a new one for MY list, doomsday book (just because i already have it and i never knew it was PA).
i'm almost done with lucifer's hammer right now and it's quite good, though i can't say i liked it as much as the stand or swan song.
hm, and something i just remembered (looked through my bookshelf), i've forgotten the details unfortunately... poul anderson's orion shall rise.

Andy: I agree with Parable of the Sower being more resonate than The Road. It's a much stronger, much more emotional novel and one which I far prefer over The Road.

No Country for Old Men is also more likely to stick with me than The Road.

Jen: Haven't read Doomsday Book, but it was on the list I found.

I really liked The Road, had to read it twice, don't know what to tell you...Now I'm reading Dies the Fire and enjoying that too. Just finished Into the Forest, liked it okay, should have gotten into actually surviving in the forest more than it did. I am legend was interesting but left me disappointed. Have fun reading more PA!

I read Blood Meridian and No Country for Old Men (both of which did resonate with me) before I read The Road. Although Butler takes a different approach than McCarthy (and thus, comparing the two is probably unfair) Now I'm reading Dies the Fire and enjoying that too
---------------------------------
There are a lot of sites out there showing book video. BookVideoTV, BookTelevision and of course CSPAN, but I like how BN.com and Reader's Entertainment TV have specific genre channels and original shows. There's just more to see and I can be specific in what genre I'm interested in. Anyone else watch online tv? readersentertainment.tv