The Uplift War, by David Brin: The Uplift War completes David Brin's first Uplift trilogy (Sundiver, Startide Rising, The Uplift War). There is conflict on the planet of Garth. Humans and their clients, the chims, are fighting for survival on Garth as they face an invasion by the Gubru, an avian race. This small conflict on Garth is a microcosm for the threats the wolfling humans, who claim to have never been uplifted by a patron race, face across the galaxy and home on Earth. Most of the five galaxies are against humanity for being such upstarts and even though the conflict is so big, David Brin chooses to examine the overall conflict by looking at one small aspect of it and that aspect can very well be representative. I think I can tell why The Uplift War won the Hugo, but while this follow up to Startide Rising is very ambitious, it does not work quite as well as Brin's previous Uplift offering. The problem, I think, is in the characters. There is no character which truly stands out. Yes, yes, Fiben is interesting, Robert's transition to Tarzan Boy / Warrior is fine, as is that Atha... alien woman, but somehow the story of chims and humans with the occasional alien, it doesn't hit full marks. The Uplift War is an impressive science fiction novel, but it fails to hit me where I live (the heart, that would be the heart).

The Complete Peanuts: 1963 - 1964, by Charles M. Schulz: As always, happiness is a collection of Peanuts strips. In this collection Schulz introduces a character named 5, Snoopy goes to the hospital, Linus runs for class president, Charlie Brown gets "Little Leaguer’s Elbow", Linus's blanket-hating-grandmother comes to visit, birds carry signs, Linus is aware of his tongue, Charlie Brown's favorite ballplayer Joe Shlabotnik keeps getting sent to the minors, and Charlie Brown just can't seem to get a Joe Shlabotnik baseball card. Good times were had by all, except for the Peanuts gang. 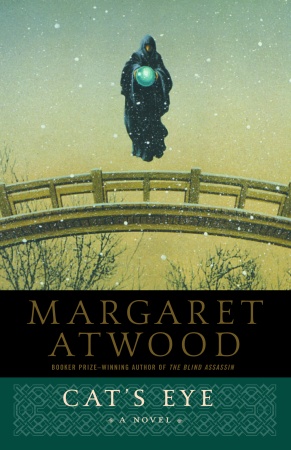 Cat's Eye, by Margaret Atwood: I'm not disappointed, per se, that this wasn't one of Atwood's science fiction offerings (and yes, no matter what Atwood tells us, she has written several science fiction novels). What I'm disappointed in, more or less, is just the story. According to the back cover of the paperback, Cat's Eye is about childhood female friendships and yeah, I suppose it is. Atwood shows the cattiness of girls and tells the story of an older woman who is a "controversial painter", although that part really does not matter, and she flashes back to her childhood and her friendships, such as they were. Actually, there are few true flashbacks because most of the novel is of the child. The perspective is given by the older woman. Cat's Eye just fails to engage or satisfy. There are four hundred or so pages, but they do not feel like they amount to anything or truly build towards anything. A disappointing effort by Margaret Atwood (whom I normally enjoy).

Oh, and that spooky image on the cover of Cat's Eye? The orb in question? It's a marble. How prosaic.
Posted by Joe on Wednesday, June 06, 2007
Email ThisBlogThis!Share to TwitterShare to FacebookShare to Pinterest