Servant of the Underworld, by Aliette de Bodard 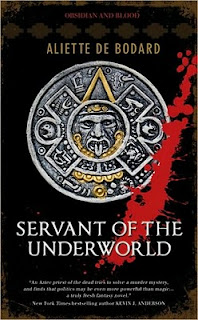 During the height of the Aztec Empire in the capitol city of Tenochtitlan a Priestess disappears from her calmecac (think, school). The room from which she disappeared, unseen, is drenched in an obscene amount of blood. Tasked to investigate is Acatl, the High Priest of the Dead. Acatl has tried to avoid the politics of Empire, but the investigation will touch the politics of the Empire, gods, and of family. Servant of the Underworld is a murder mystery / family drama / historical fantasy / coming of age story and it is all awesome.

Aliette de Bodard does a fantastic job spinning this story. Acatl is absolutely uncomfortable getting involved in anything larger than the private duties of his religion, but his integrity and competence demands that he sees this investigation through, no matter the impact it may have on his family, on his brother who is implicated in the crime. There is a tenseness that pervades the novel, a sense that the time to find out the truth is running short. Politics requires an expedited investigation.

Servant of the Underworld is a fantastic novel which delves into a world so seldom explored in fiction. de Bodard mentions in the Afterword that one of her motivations was to show the Aztecs as more than the more common representation of bloodthirsty barbarian villains. Her accomplishment here is that while the side of the Aztecs we see in Servant of the Underworld is mostly that of the clergy, there is a pervading sense of a vibrant culture behind the scenes. Finishing Servant of the Underworld, which is a complete story on its own, will only compel readers to impatiently wait for the next volume, Harbinger of the Storm. I want more.
Posted by Joe on Sunday, December 19, 2010
Email ThisBlogThis!Share to TwitterShare to FacebookShare to Pinterest
Labels: Aliette de Bodard

I'm glad someone reviewed this. Your review is spot on. I just picked this book up a few weeks ago in the library and loved it! Like you, I'm eagerly waiting for Harbingers of the Storm.